Community objections over last two years can’t change that the zoning is right for a carwash in Festival at Manchester Lakes. 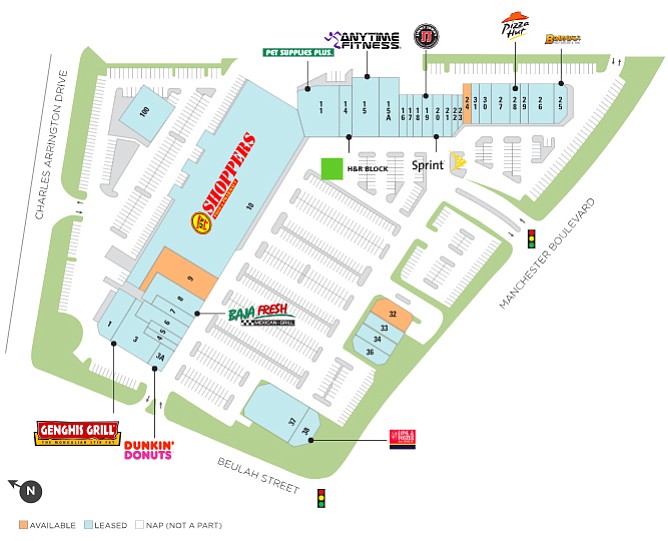 Festival at Manchester Lakes: The new carwash will have an entrance on Charles Arrington Drive.

“There’s no such thing as a perfect case.” —Jeff McKay, Lee Supervisor

“We are tired of coming to meetings the last two years when we feel our voices are not being heard.” —Carolsue Carlson-Jones

“For two years, my neighbors and I have been speaking out in opposition to the proposed location of this business. We have brought forth environmental concerns, increased traffic concerns,” said Carolsue Carlson-Jones. “We are tired, we are tired of coming to meetings the last two years when we feel our voices are not being heard.”

Karen Jackson, Carlson-Jones and their neighbors voiced environmental objections, traffic congestion and safety issues, historical proffer issues, and noise concerns before the Planning Commission in April and the Board of Supervisors on July 31, 2018. “Why is the onus to maintain a quiet residential neighborhood on us and not on the business that may disrupt our lives?” said Jackson.

Jackson said 16 of the 17 public speakers opposed the plan when the Planning Commission conducted its public hearing in April. “I do not feel that the concerns voiced by residents have ever been taken in earnest,” she said. “This area is already busy enough as it is and we don’t need more congestion, especially when there are already car washes nearby.”

The Board of Supervisors approved the case unanimously at its meeting, July 31, 2018.

“While I don’t love it, I don’t think I have reason to recommend denial,” he said.

Chairman Sharon Bulova thanked the 15 speakers for their public service and advocacy.

“I know you’re disappointed in the outcome, but I know you made a difference in some of the elements,” said Bulova.

The car wash is expected to attract 150 customers per day, according to Casey Judge from the Department of Planning and Zoning, and will be permitted to operate from 8 a.m. to 7 p.m., seven days a week.

“This is C-8 zoning on this particular parcel?” asked Mason Supervisor Penelope Gross.

“That is correct,” said Casey Judge, from Department of Planning and Zoning.

“Which is our heaviest commercial zoning,” said Gross.

“That is correct,” said Judge.

The site had been previously approved to permit a car wash, according to county documents.

“I’m excited and proud of the facility that we are proposing,” said Bob Rust, who appeared before the Board.

“I think it’s going to result in a thoughtful and innovative proposal before you. I think it’s something, if approved, the community could be proud of,” said Rust.

THE NEIGHBORHOOD did make a difference in a number of issues.

“These changes included a reduction in building height, installation of 7,000 square feet of pervious pavers on-site to help with stormwater management, a reduction of hours-of operation by four hours, and a tonal alarm for noise reduction based on a newly-provided noise study,” said Lee District Planning Commissioner James Migliaccio.

White Horse Four committed to capturing at least 80 percent of the wastewater associated with a car wash cycle, designed a plan to accommodate stacking up to 40 cars, will use a tonal alarm noise abatement system, and also proffered $15,000 for nearby traffic improvements, said Migliaccio.

“While I understand that my recommendation may not be what some neighbors would like to hear tonight, I do appreciate their efforts in making this application better throughout the process,” Migliaccio said when the Planning Commission recommended its approval on June 14, 2018.

NEIGHBORS WEREN’T CONVINCED, then, or now.

“I will always support economic growth but I do not understand how putting a car wash in a parking lot not seen or accessible from a main thoroughfare is beneficial. Long term sustainability must be considered,” said Jackson.

“It’s just like no other location for a car wash,” said John Pearson, who described Charles Arrington Drive, the main access proposed for the car wash.

Mason Supervisor Gross remembers a similar situation in her neighborhood before she became the Mason Supervisor. As a supervisor, she’s had “several” car wash applications “in my own District, and they’ve always been a little difficult.”

“But the only problem we’ve had with those car washes has been some stacking in the main road after snowstorms, which has been a very temporary kind of situation,” Gross said.

“I remember in my own neighborhood, years ago, this was probably 1982, ‘83, ‘84, there was a proposal for a car wash next to a gas station in our neighborhood. And people did not want it. And it never got built,” she said. “That is still a vacant lot, next to a gas station. It now has a chain link fence around it because it was such a problem. It’s ugly and nothing is ever going to happen there because the community did not want the car wash and nobody has ever touched it since.”