Birchwood on the Block in Arlington
Votes

Birchwood on the Block in Arlington 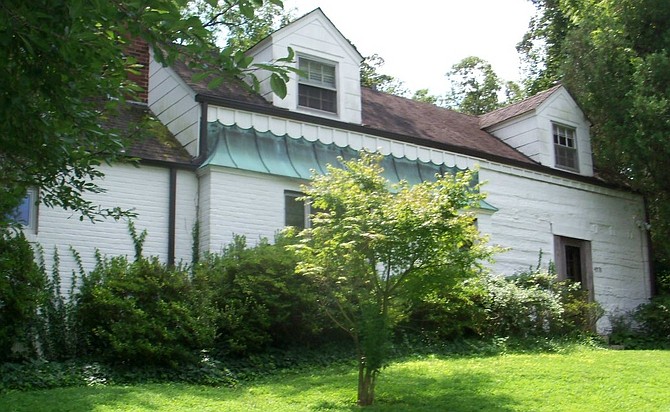 Teddy Roosevelt loved ice cream, as one might tell from his rotund physique. A favored stop for the delicacy was a humble log cabin in Arlington, now designated 4756 26th Street, North, known as Birchwood.

The large area surrounding the site was part of a royal land grant in the 18th century. In or about 1810, the particular plot came into ownership of one Caleb Birch and he built a home. Fire destroyed that building, so another log cabin was built on the spot in 1836.

Ten years later, a second building doubled the size of living quarters. With one shared roof and a middle passageway, it was a model of “dog trot” construction. Both cabins are embedded in the house seen today.

The second oldest house in Arlington county, Birchwood is bracketed by Ball-sellers (1760) and Dawson-Bailey (1856). In the closing days of the 19th century, a large part of the original property came into the hands of Rear Admiral Presley M. Rixey, Surgeon General of the United States Navy and friend of Theodore Roosevelt. Arlington was still rural and riddled with woods and trails. Rixey and Roosevelt enjoyed horseback riding across the countryside. Sometimes the last stop for physician and politician was Birchwood, home to Rixey’s valet, Richard H. Wallace. The lure was Wallace’s hand-churned ice cream.

In 1908, Wallace and three co-workers were tasked with carving a new golf course out of farmland, an assignment occasioned by re-location of Washington Golf and Country Club. Birchwood was an abandoned hulk uncovered while clearing brush. Allegedly, Wallace personally changed the plans for the 10th hole so the ruin would escape destruction. When Rixey learned of what happened, he allowed Wallace to repair the cabin for use as his residence.

Land records show Wallace held title to the nearly three acres tract from 1912 to 1939. The next owners, Walter and Gladys Horn, acquired a house in serious disrepair. They dismantled and rebuilt it using the original logs, and much of the extended and extensive work was the “do it yourself” variety.

Worthy of note is the claim that Birchwood is haunted, not by a ghost but by a poltergeist. Ghosts are sometimes visible. Poltergeists are never seen, but content themselves with slamming doors, opening faucets and causing troublesome sounds in the night. According to N. Jay Thierry, Century 21 New Millennium real estate agent on the current sale, longtime owner Jane Coates was so acclimated to odd occurrences that she named the unseen force “Caleb” after the original homesteader. Years ago, a publication described Birchwood as “one of the county’s prize landmarks.” Today that opinion is evidenced by a historical marker erected by the county government at curbside.