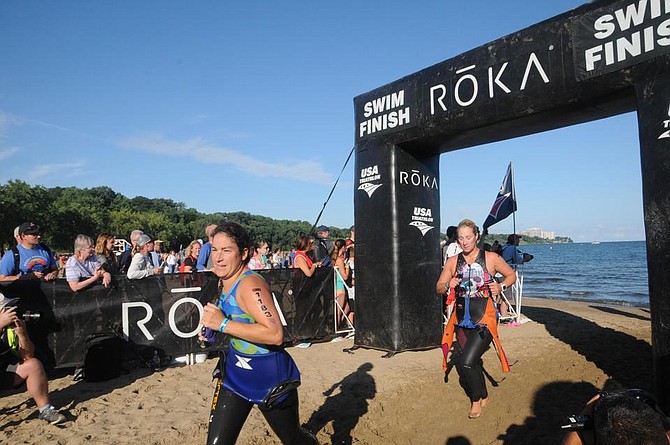 Kristen McGarr of Chantilly had nearly completed the first half mile of a 1500-meter swim at the USA Triathlon Age GroupOlympic Distance National Championship competition on Aug. 11 in Lake Erie off the shore of Cleveland, Ohio, when a jet ski streaked in front of her and she swam into an oar that was not supposed to be there.

She raised her head to see what was going on. She saw several boats and lifeguards busy pulling from the water a man who suffered an apparent heart attack. While that happened, McGarr observed a woman calling for help, well away from the rescue in progress.

She got the help of another triathlete in the event, swam over to the woman in distress, and pulled her up to the surface from under the water. McGarr then managed to calm down the woman by talking to her and keeping her hand close to the woman, who had exhausted herself by swimming too fast in the swells that were almost two meters high.

McGarr got the attention of lifeguards who were on boats and paddle boards for the event. The lifeguards were able to rescue the woman. That left McGarr with a half mile left to finish the swim, followed by the 25-mile bike, followed by the 6.2-mile run. After treading water for a few minutes, McGarr said that she would not be setting any personal record for best time, but she did think that she was aided in treading water from the coaching she got from Coach Florence Emanuel of the Riptide Swim Team which practices at the Cub Run RECenter in Chantilly.

The writer of this article is a fellow participant in the national age group championships in Cleveland, and member of the Riptide Swim Team in Chantilly.