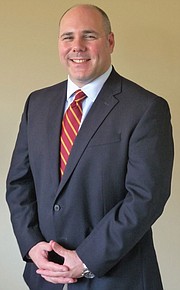 A member of Ireton’s Girls Who Code club teaches about programming at Hack BI, a computer programming competition hosted at Ireton in January.

Below is the seventh in an ongoing series of conversations with local religious leaders about religion in the public square. It’s edited for space, style, and flow.

Dr. Thomas Curry serves as the Head of School at Bishop Ireton Catholic High School. After growing up in Catholic schools, as an adult he’s spent much of his career in Catholic education. Ireton is one of eight religious schools in Alexandria, according to the Virginia Council for Private Education. It’s one of five private schools in Alexandria serving grades 9-12, in addition to T. C. Williams, the city’s public high school.

Catholic teaching speaks of “penetrat[ing] of all spheres of human society” and “sanctif[ying]…the world from within as a leaven.” Though religions, not least Catholicism, also have various alternative institutions — especially schools, media. Could you comment on this tension?

For 55 years, you’ve got students who’ve come from mainly Alexandria to Bishop Ireton, and then gone off and really changed the world. …Being a coed school, and being a place where religion can be discussed freely, and where faith can be practiced freely, we think is a preparation for the real world. Because the Church has never been out of the world, the Church has always been in the world. Christ, if we speak from the perspective of faith, is the incarnation of God in the world. So we have always been an incarnated Church. …And the school’s the same. We are an extension of the Church’s mission to proclaim the gospel, and that’s through education.”

“You’ve spoken most about the role of faith in the education of the actual students…. Would you sit down with the principals, or whoever your counterparts would be, in public schools periodically and discuss the state of youth in the city? Or do teachers cross-pollinate in that way?

“We have service as part of our curriculum. …Senior centers, preschools, some other places. So [students are] out in the field, if you will, doing direct service to those in need. We’ll also do fundraisers here. We have a sister school in Haiti that we support. We have service trips to Camden, New Jersey, which is a city devastated with poverty and drugs and crime. …We also do something called Work Camp, where kids go away for a full week…to build projects in rural areas. Internationally, we’re a global school with Catholic Relief Services [an aid organization]. …We collect money and we teach our kids about what service means globally. …“When it comes to safety and security, our director of operations has been to several conversations with his counterparts at St. Stephen’s, Episcopal and T. C.

“With teachers, I’ve seen the arts programs connect. Two years ago, [our students] had an opportunity to play at the Kennedy Center. We had choirs from I think five different public schools come and join the students from BI.

“Last year we did a ‘hackathon’ [a computer programming competition]. …I think we drew from like 45 schools. Kids from all sorts of public schools came in.

“One thing that we’d like to do is to connect our students — and this also gets to your question about leaven — to local businesses; to the National Science Foundation; our parents are involved in government and military and the private sector and the Church; and nonprofits, we’re in the nonprofit capital of the world here; how many associations are here in Alexandria, and how many of their parents are sitting on those boards? So getting a kind of small institute within the school — I’m not sure what that looks like, exactly — that connects students to those various areas, while they’re students. And having those leaders…come and talk to our kids.

“We are a Catholic school within the Salesian tradition, which goes back to St. Francis de Sales. He was one of the first saints to build a lay spirituality. He saw holiness in the way that mothers raise their children, in the way that the shopkeepers treated their customers, and he built on that. It’s in and through your profession, or your vocation, that God is calling you to holiness. That’s how we see our education here. Circle-the-wagons Catholicism, it doesn’t make sense to me. I mean, you’re always in the world. To escape, I think, is the opposite of Catholic.”

Bishop Ireton says: “The presence of students from other faiths provides a wonderful diversity to the school.” At the same time, “non-Catholic students are expected to participate in the religious formation and education programs” and “must participate in liturgies.” Does this ever present a challenge, despite voluntarily enrollment? What other religions are present?

“We have a full array of Protestant denominations, Jewish teachers, five or six Muslim students. I think [non-Catholic students] welcome [attendance at Mass]. It’s kind of neat, as a school, to be totally there, everyone: ‘this is Bishop Ireton, all of us in the flesh.’ And that includes everybody.

“I don’t think it’s a tension. In fact, one of my former students at another school I taught at was Orthodox Jewish, and was probably my best theology student. Part of it was because he asked a lot of questions. We had a great relationship. His parents invited me over to a Seder for Passover and I got to read some of the prayer. I’ve taught world religions myself. My area actually was in Mahayana Buddhism and Catholicism, and those kinds of conversations. So the Dalai Lama commenting on the four Gospels, I find that fascinating. And Catholic theologians commenting on the writings for the Buddhist tradition.

“We don’t make [non-Catholic students] say the certain Catholic prayers, we don’t make them sign themselves. That would be inappropriate and disrespectful, absolutely. It’s only been positive, because the students stay here all four years and they graduate happy to have had an Ireton education.

“Personally, I was always in Catholic schools, but I have to think that certain Jewish schools have Christian students that go there. …My nephew knows many Jewish hymns right now, because he’s at a Jewish day school…but his parents are Catholic and he’s Catholic.”

Bishop Ireton says it “challenges students to recognize and respect the multicultural diversity within our global society.” What are some specific ways this challenging occurs?

“[Students’] families come from all over the globe. You look out and it looks like America, it’s who we are. And it’s very welcomed. I lived in Asia, I lived in Japan for a year, so having conversations with people who have traveled and lived in those areas that I’ve been to is fascinating. My wife is from South Korea, so having conversations with our Korean students, seeing their parents and being able to say hello in Korean is kind of neat.

“You also have our language program. We offer Italian, which is not something you see at every school. We had Russian. Obviously we have French, Spanish, German, and Latin. Having Mandarin is going to be very interesting for us, it’s going to be the first time.

“We host here a diocesan-wide choir night, and so there are choirs from the Catholic Church here in Old Town, St. Joseph, a historically black Catholic Church. You have the Korean Catholic Church, St. Paul Chung, in Chantilly.

“We have [students from] Eastern churches also, so Coptic, Ethiopian.”

“One simple definition would be the application of virtue. [Traditionally the Catholic Church teaches seven virtues: faith, hope, charity (love of God and neighbor), prudence, justice, fortitude, temperance.] Our mission is to form the whole child, so not to differentiate among the virtues, they’re all strengths.

“The definition of a Catholic ethic is not [merely], ‘Do good, avoid evil,’ or to be a ‘nice person.’ …We’re all for academic excellence. There are certain students who succeed very well. There are others who don’t succeed at that level. We’re not going to just leave them behind, so we coach them up. That could be in the classroom, it could be on the [sports] field. …We have [an] advisory program [that pairs students with faculty], to make sure that one adult in the building is keeping an eye on each of our students for all four years, watching them develop, seeing some of the struggles they go through, being there as someone who is a resource.”