‘The Alcove’ Pops-Up in Rosslyn
Votes

‘The Alcove’ Pops-Up in Rosslyn 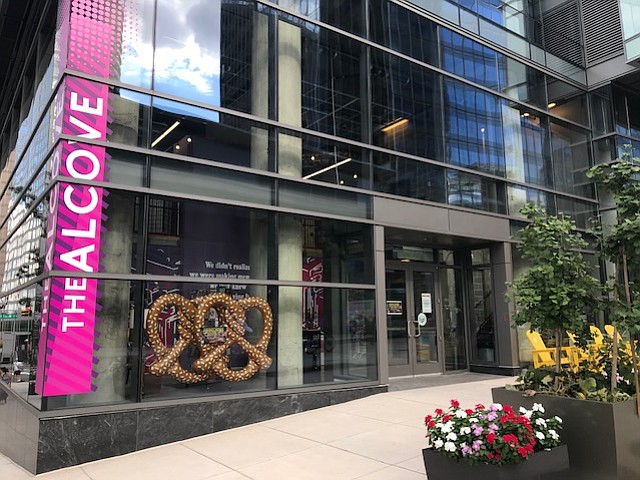 The Alcove, a pop-up store and community center.

In four weeks, the BID and its partners transformed two floors of empty retail space in the JBG Smith-managed Central Place into The Alcove, a chic yet cozy pop-up store and community center. With two glass walls forming a corner on North Moore Street and 19th Street North, natural light streams into the space and illuminates potted plants, glossy white tables and chairs, and plush seats. Plus, The Alcove permanently hosts Carpe Librum, a used bookstore whose proceeds benefit D.C.-based non-profit Turning the Page. The non-profit provides parents in D.C.’s Wards 7 and 8 and Arlington with books and other home learning resources so they may support their children’s educational development.

Creating the space did not come without its challenges. Mary-Claire Burick, president of the Rosslyn BID, said, “The technical details of constructing The Alcove were quite difficult. We had to figure out how to temporarily cool the entire space and to coordinate the build-out so construction dust would not fly around while the muralist painted.” She added, “It took a lot of tenacity from BID Vice President Santya Lanman and Senior Events Manager Sophie Barral to overcome the learning curve of building, permitting, and zoning a space on such a short timeline.”

Yet the BID’s partners surmounted the challenges — on a pro bono basis — of bringing The Alcove to life. DAVIS Construction and Capitol Drywall worked on the build-out. JBG Smith provided the use of the space for the duration of the pop up. Streetsense helped with retail merchandising. Gensler contributed structural design work. The Rosslyn BID decorated the interior space, including setting up a window display — complete with enormous pretzel structures — which previews Heidelberg Pastry Shoppe’s appearance on Aug. 29 and 30. Linny Giffin, co-founder of The Lemon Collective workshop space in D.C., also helped decorate — creating the rainbow string art hanging from the ceiling.

Due to the successful collaboration of the BID and its partners, The Alcove drew over 600 people on opening day. Burick said, “The BID could not have pulled off The Alcove without the generous help of our partners who reiterated their love of the neighborhood and wish to give back to it.” Similarly, Jason King, president and CEO of Turning the Page, said, “On opening day, I was struck by the strategic-ness of folks in Arlington. The Alcove confirms how much can be achieved when community members work together.”

In addition to its aesthetic appeal, the programming at The Alcove attracts a steady stream of visitors. The Arlington Public Library has been instrumental in planning events at The Alcove. Events include book discussions with nationally-renowned authors, family story time, yoga, DIY crafting, manicures, workshops for businesses, and more.

Michelle Fernandez, program and partnership librarian at Arlington Public Library, organized several author talks. On Aug. 9, author Roy Scranton appeared at The Alcove to discuss “We’re Doomed. Now What?,” which highlights crises of this era. Approximately 50 millennials and baby boomers attended the talk, many of whom engaged in a dialogue about how to combat climate change. Fernandez said, “Scranton was a good fit at The Alcove since the Rosslyn community is very environmentally-concerned and conscious.” She added that Arlington Public Library will welcome author Leopoldo Gout to The Alcove on Sept. 13 to discuss the third book of his trilogy, “Genius: The Con,” which focuses on the adventures of three computer geniuses. Fernandez stated, “Arlington Public Library invited Gout to The Alcove since Rosslyn is quite a technologically tapped-in community.”

In addition to reflecting the strengths of the Rosslyn community, The Alcove seeks to fill the neighborhood’s needs. Fernandez noted that Arlington Public Library lacks a branch in Rosslyn and King observed that The Alcove marks one of the only places in Arlington to buy high quality, used books.

Sylvie Luanghy, Arlington resident of over 20 years, visited The Alcove on and said, “Without a permanent community area in Rosslyn, The Alcove provides a fantastic space to do work, organize a book group, or sell promotional products.”

Similarly, Fernandez said, “The Alcove brings culture and excitement to an area marked by 9 to 5 businesses and where activity sometimes dies down after work.”

Whether community members visit The Alcove to engage in an activity or to sit still, Burick reflected, “The Alcove signifies a space where Arlingtonians can unwind and get away from it all.” The Alcove will remain open through Oct. 6 on Tuesday through Saturday from 11 a.m. to 8 p.m.