A Party You’d Never Want to Leave in Springfield
Votes

A Party You’d Never Want to Leave in Springfield 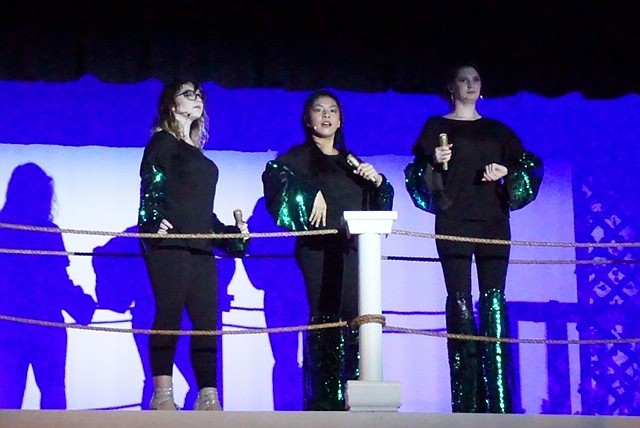 “Mamma Mia!” Thomas A. Edison High School's production of this well-loved and timeless musical was a whirlwind of fun, laughter, tears, and drama, all set on a beautiful Grecian island. It was originally a Broadway musical written by Catherine Johnson, and based on music by the the wildly popular band ABBA. The fame of the musical skyrocketed when it was adapted into a movie starring Meryl Streep and Colin Firth. The story follows the life of a twenty-one year old girl Sophie, her mother Donna, and the quest to discover both her father and herself in the days before her wedding. She invites her three potential fathers, Sam, Harry, and Bill, to the wedding without her mother knowing, and chaos and drama ensue.

Throughout the show, each character was spotlighted in their own way, with each one creating their own character depth. Donna Sheridan (Angeline Ignacio), Sophie's mother, showed true characterization and emotion through both her expressive actions and powerhouse vocals, and Ignacio stayed committed to her character throughout the show. These emotions and vocals were best seen in the bittersweet song "Slipping Through My Fingers," when Donna realizes how fast her daughter has grown, and that it is finally time to let her go. This song also was evidence of Ignacio's touching chemistry with Sophie Sheridan (Joanna Madamba), who shone as the lively, spontaneous, and energetic girl so many have come to know and love. Her voice was lovely and clear even throughout difficult choreography, and Madamba truly made the role her own. Other notably talented characters include the hilarious Bill Austin (Alex Savage) and Tanya Cresham-Leigh (Maggie Landis), whose comedic timing paired with wonderful vocals and always-focused characterization made for a energetic and lively performance.

Another strong presence on stage was the role of Harry Bright (Nathaniel McCay), whose dramatic character arc was clearly evident throughout the show. His strong vocals enchanted the audience, bringing them into his complex story. Sam Carmichael, the third "father", also was a strong stage presence and showed clear talent in both acting and singing. There was also entertaining choreography in which all the cast members participated in, most notably Ali (Jada Paul) and Eddie (Jackson Bertman), who brought energy to the production. The roles of Lisa (Ava Regehr) and Pepper (Amen Adib) also contributed greatly to the humor, liveliness, and fun of the show.

Overall, the costumes (designed by Lenae Sterrett) for each character were spot on, especially the Dynamos' costumes and the wedding dress. The props were also accurate and well used, giving the story the most natural and real feeling. The cast made full use of the beautiful set, which was made all the more noticeable with generous use of the spotlight. The makeup was subtle and accurate, and greatly contributed to the wonderful visuals of the show.

“Mamma Mia!” was a fun show of dancing and singing that left a smile on the face of every audience member. Each member of the cast was clearly having fun, and the energy was rarely lacking. Each song told a story through strong vocals and entertaining choreography. The dramatic story was well told with memorable visuals, leaving the audience with a feeling that they had just been at a Grecian party they never wanted to leave.