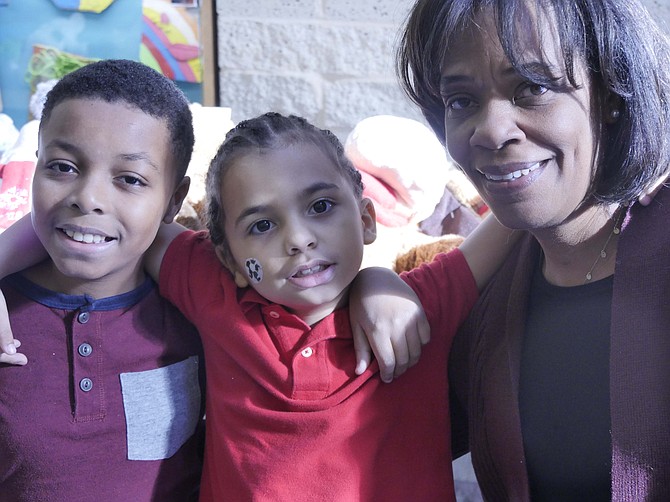 Twila Mack is heading for the food line while her two adopted sons, 10-year-old Ben and 7-year-old David, are making Christmas surprises for her at one of the craft tables. The DHS Adoption/ Foster Care Holiday Party celebrated its 16-plus years on Saturday, Dec. 8.

Kimberly Bonham says, "We have 71 foster families in the program, one of the highest we've ever had; we're really proud of it." She adds, "If you count the youth center 18-21 year olds, we have 84."

But Lisa Friedman, bureau chief for Child Welfare, says, "We could have 60 kids and 80 homes so it seems like enough. But if you need a Spanish speaking home or the child is allergic to pets, and children have other specific needs so you narrow the field of options." She says the biggest need is foster homes for teenagers.

Mack explains this is the first time she has adopted children. "I learned about the great need for foster care so what happened was I saw a child mistreated and that's what made my decision." She said, "My younger son is delightful. His parents just wanted a better life for him.

"When I got the placement for my older son he had already been in a number of foster homes. I couldn't stand the thought of him going into another one that could make him or break him so I adopted him." Are there issues? "Oh yeah. He is a ‘special ed’ kid for behavior problems. But I felt like it was now or never. If he had been rejected one more time, he would have just given up. Knock on wood."

Rebecca Goodheart adds, "Some are definitely easier than others. But even when they are driving you crazy, it's hard to let them go. But the goal of the program is to return them home or to a relative."

Elias Marique, a DHS employee, blasts out from the microphone on the stage. "And the next winner of our gift basket is Noelle. What an appropriate name for the season."

Today's event was sponsored by Nestlé whose employees had helped set up at Kenmore Middle School, provided the food from the company's caterer, and decorated the stage with blow-up snowmen and menorahs. Jennifer Campbell of Nestlé’s Community Affairs Department said their employees had made the wreaths decorating the tables on Thursday and had spent all day Friday baking 500 chocolate chip, oatmeal and sugar cookies and assembling them in decorative boxes as take home gifts. "We collected 422 toys and gift cards, and we have 30 employees here today volunteering.“

Campbell said when Nestlé moved their home office from California to Arlington, they were looking for a community connection. "I am in the process of becoming a foster parent and when they talked about what they do for the holidays, Nestlé decided it was a good connection for us."

Friedman says, "The county has a new policy prohibiting the Department of Human Resources from soliciting donations anymore so when Nestle came to us to offer this, it was a great benefit."

The room quiets as the Yorktown High School choir files in to the front of the room. "This is an event we like to do each year."