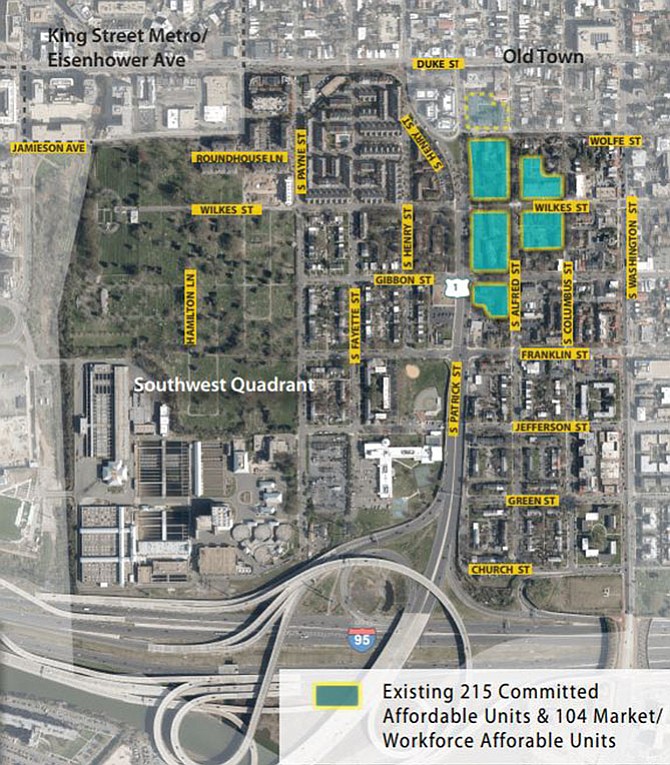 The Heritage, one of the Route 1 South affordable neighborhoods. Photo contributed 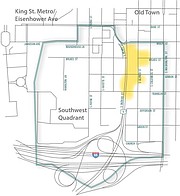 Route 1 South has been an affordable part of Alexandria for over a century. It was one of the predominantly black neighborhoods that arose out of the Civil War era to shelter former slaves seeking refuge in the north, who bonded together in Alexandria to form a community. Then during urban renewal, it was redeveloped to include workforce housing and affordable apartments. Now, as prices continue to rise for homes in Alexandria, the city is working to stave off market demands for luxury homes and save one of Alexandria’s historically affordable neighborhoods.

“Within the area that is the primary focus of this update to the plan we have three properties that have been deeply affordable for a very long time because they have had these Housing and Urban Development (HUD) rental subsidies,” said Helen McIlvaine, director of the Office of Housing.

According to McIlvaine, the properties were all at one point owned by a national company, AIMCO, and were sold in 2009. One set of homes is owned by the Alfred Street Baptist Church, the other by a New York real estate investment company called Ares. McIlvaine says the ones owned by Ares, called The Heritage and Old Towne West III, could not renew that contract with one year of notice.

“It’s in the general neighborhood where other housing is very expensive,” said McIlvaine. “Without something like this, there are very few ways to put the breaks on housing costs.”

Redevelopment of the homes along Route 1 South is inevitable, but city staff say the battle now is working to keep housing affordability part of the redevelopment.

“There is an acknowledgement that some of these will develop over time,” said Jeff Farner, deputy director of Planning and Zoning. “This is a chance to be proactive and establish vision for corridor. Part of this plan is to be proactive and make sure whatever we come up with sort of reinforces the character of the corridor.”

Farner said identifying the character of the corridor is one of the main focuses of the ongoing community meetings. Throughout January, a series of pop-up meetings took place throughout the neighborhood and surrounding locations. Two community meetings will be held in February, one on Feb. 15 from 7 to 9 p.m. at a location to be determined, and one on Feb. 20, from 7 to 9 p.m. at the Lee Center. Monday, Feb. 26 through Saturday, March 3, a charrette will be held at the Lee Center Exhibit Hall, hosting evening community meetings and promoting engagement with staff. By the week of April 16, a draft plan will be released for public hearings at the Planning Commission and City Council in June.

“We are hopeful that we will come up with a plan to potentially help incentivize them to renew their contracts on a long-term basis and provide ways to either preserve or redevelop them,” said Farner.

“We’re lucky that Alfred Street has fully embraced the planning process,” said McIlvaine. “I think our goals are aligned, that we are all interested in preserving the housing affordability. Among the things we have talked to them about, we’re working together to preserve those contracts over the long term. That’s part of what this planning process is about: what tools and strategies can we use to keep all of the units affordable. They are due to expire beginning next year, which is one of the reasons that the planning process is time sensitive.”

Over the last year, Alfred Street Baptist Church has been working on and slowly moving forward with plans for construction. McIlvaine says a memorandum of understanding is being developed between the city and the church that the 22 units being lost as part of the construction will eventually be replaced.

“That could be part of the redevelopment of the other 55 units, or could buy a building nearby,” said McIlvaine, “but we want these to be units we’re not currently counting.”

“This has been on our radar for a while,” said McIlvaine. “We want to be at a point where we have dates and a real plan.”

As for the church redevelopment, Rob Kerns, division chief for Planning and Zoning, says the church has been in discussions with the city about the expansion for two years.

“It’s a large endeavor, and they’ve been working with the community through various meetings and revisions,” said Kerns. “They’ve been working around making changes based on neighborhood and staff feedback, and bringing along their congregation which ultimately has to pay for this project. The Board of Architectural Review comments recently subtly adjusted the building to again be more friendly to the historic district and neighbors, as well as working with underground parking garage. They’re having technical studies done there because have to be careful about underground water situation. They’re getting into the fine detail for viability and cost.”

Kerns said the project is expected to come to a public hearing this fall.

“They have not been in a rush for this project,” said Kerns. “They’re pacing along to try and do it correctly, bringing neighbors and parishioners along. They were originally looking at spring, but moved to fall to make sure everything is in order.”