Pharmacy Construction Means Headache for Some in Great Falls
Votes

Pharmacy Construction Means Headache for Some in Great Falls

Neighbors worry about the inevitable surge of traffic and noise to their corner of Great Falls. 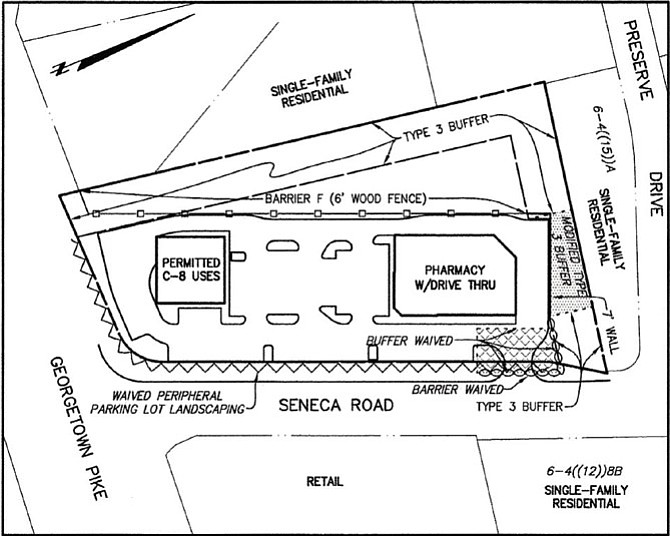 Aerial rendering of the site showing both buildings and parking lot. Image from the developer’s application to Fairfax County Planning and Zoning

This rendering depicts the CVS pharmacy to be built at 1020 Seneca Road.

If you live near the intersection of Seneca Road and Georgetown Pike, your commute is about to get more hectic. A new CVS location was approved in November 2016 to be built in the heavily forested corner that separates the Seneca Square area from Route 7. The developer, Republic Land Development, has confirmed that construction should start on or about Feb. 24, with the grand opening about seven months later, barring any weather and construction delays.

Bill Canis, the president of the Great Falls Citizens Association (GFCA), shared that the developer was very cooperative during meetings and listened to the community’s concerns. GFCA was actively involved in negotiating the original contract, hosting several town meetings between the residents, the developer, and county officials. Canis said, “We had many concerned residents at the meeting and the applicants did a good job trying to accommodate their concerns.”

Walter Kim, a homeowner in the adjacent Great Falls Woods neighborhood, cites the current congestion in the intersection and the amount of cars driving quickly down Seneca Road as a huge problem already. “I wish the study had a more robust approach to figure out the estimated number of people that are going to be coming in and out, because I think there’s going to be a lot more congestion than they’re planning,” Kim says, referencing the planning surveys done by Fairfax County early on.

John W. Foust, Dranesville District Supervisor, addressed questions about balancing the needs of the community against applications from retailers. “You look at the underlying zoning, what’s being proposed, and you compare that to the by-right usage; then work with the residential community to mitigate the issues raised by them to the applicants.”

Stacy Hornstein, Senior Vice President of Republic Land Development, feels they did as much as possible to appease the residents. “We met with the community 11 times. The property was commercially zoned for decades so we had the ‘by right’ to build, but the proposed drive-thru pharmacy required a special exemption from the county, which then opened it up to the public. Part of the process was describing to the residents how the drive-thru was to operate [for picking up prescriptions only, not do regular shopping]; once they understood, most were onboard.”

TO HELP lessen the impact on the residents, Republic Land Development agreed to many concessions, including only developing two of the three acres and putting in a conservation easement that will act as an undisturbed buffer between CVS and residential lots. “We want to be a good citizen. These will be our neighbors for a long time and we want to make them happy,” Hornstein added. They also worked with local architects to make the façade more closely match the aesthetic of existing Great Falls structures.

The CVS store isn’t the only new addition, either. There will be a second building of retail spaces on the lot. Some residents are worried about what stores will be brought in and what that could do to the area. Hornstein clarified, “We’ve been marketing the space for neighborhood uses. We love the idea of getting a coffee shop in there, or a hair salon. We want stores that will provide the [most convenience] to the neighborhood. But we haven’t made any decisions yet.”

One last point of contention for some is the future of the CVS located at Georgetown Pike and Walker Road in the village. Hornstein admitted that he can’t speak for them, but “the village location staying open is the way CVS has always publicly portrayed it. As far as I know, that is my understanding [that it will remain open]. But things can change.”

FOR MORE INFORMATION on future land use matters that may affect you, visit the Great Falls Citizens Association at gfca.org/, or the Fairfax County website at www.fairfaxcounty.gov/planning-zoning/public-hearings-and-reports.