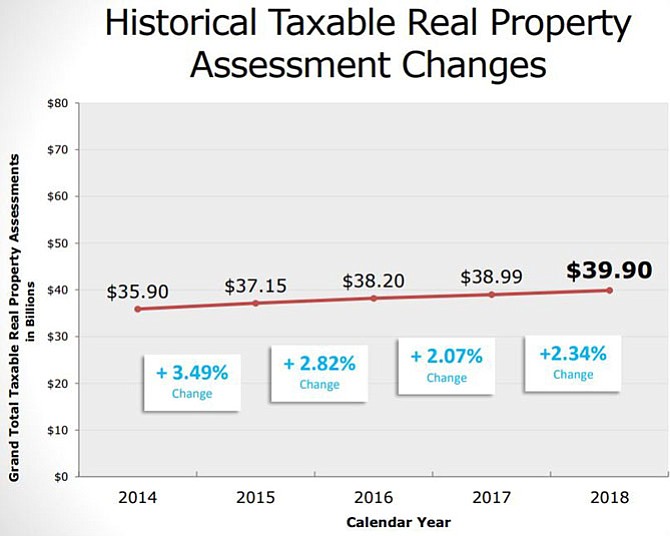 At the Feb. 13 City Council meeting, information on assessments was released. Locally assessed real property continued to increase, this year by 2.35 percent, from Jan. 1, 2017 to Jan. 1, 2018. The highest increases are in the residential tax base, which increased 3.4 percent or $751 million. The commercial tax base increased by .93 percent, or $225 million.

In total, 57.3 percent of the city’s tax base is residential, while 42.7 percent is commercial, a divide that has remained consistent for 10 years. Assessments for single family homes had the largest increase, rising by 3.4 percent or $752,585, while condominiums increased by 3.15 percent or $324,024.

Commercial properties increased their assessment value by 0.93 percent, but saw a wider stratification in values. The total assessed values were boosted by a 10.99 percent increased value in warehouses and a 7.68 percent increased in value for apartments, while office buildings faced an 8.66 percent decline. Hotels and general commercial saw a downturn as well. Staff said the dramatic decrease in office values could partially be credited to the office building occupied by the National Science Foundation shifting this year from taxable office property to tax-exempt property. Other office locations in Alexandria are also undergoing shifts away from office property and detracting from office value, like 1700 Beauregard’s ongoing transformation into a school.

Despite warnings that widespread apartment development could create a glut, staff said apartment values have only been increasing.

Staff also noted that shopping centers, which saw a mild 1.29 percent increase, were being weighed down by the vacancy at Landmark Mall.