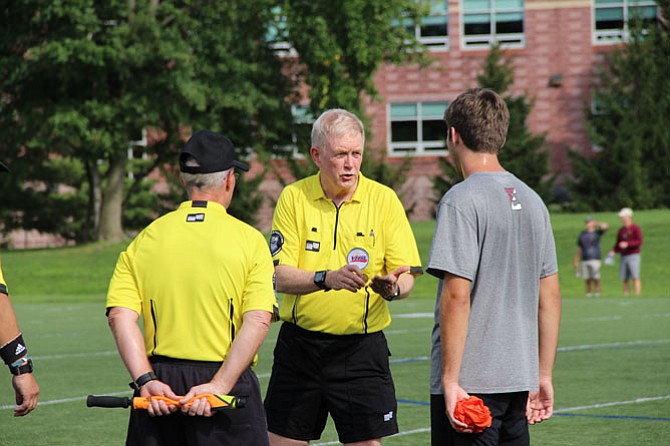 Soccer referee and attorney Ben Glass, 60, of Fairfax Station, this week launched the Varsity Soccer Sportsmanship Challenge for boys’ and girls’ high school varsity soccer teams. He is donating $13,000 to start the initiative to change the culture and improve the bad treatment of referees from players, coaches, and parents during soccer matches.

Teams that sign up and accept the challenge by March 9 will win $500 each for the boys and $500 for the girls’ teams (up to $1,000 per school) if that team completes the season without receiving a red or yellow card due to unsportsmanlike conduct. The Virginia high school varsity soccer season starts March 12.

“Some of the Northern Virginia soccer parents are crazy. They think nothing of spewing vile language from the stands towards referees,” said Glass, a referee for 44 years. “When student athletes hear their parents yelling at the referees, they think it must be OK for them to do this too.”

He continued, “We want school administrators to monitor the behavior in the stands and to get those parents to stop or leave. We are trying to raise awareness and change the culture of behavior in high school soccer.”

“What we’re saying is get through the season without a player ejection for these things: foul and abusive language to a referee, fighting, and taunting; and for the coaches, do not get ejected for yelling at a referee; and for the players, no yellow cards for arguing with a referee,” he said.

“We want school principals to really put a lot of pressure on coaches to insist on good behavior from the players. I believe that players do as the coaches do, not necessarily as the coaches say,” he said. “We also want coaches to have conversations with the parents.”

He said the bad behavior usually starts with the coach who questions every call and blames bad things in the game on the referee. “This leads to 16-17-18-year-old players saying things directly to the referee that they would never say to another adult face to face, so this leads to an atmosphere of disrespect,” he said.

“Coaches need to develop a culture of respect and teach these kids that the referees are making the least number of mistakes on the field compared to the players. It’s not a good life principle to blame others when you don’t win,” he said.

All over the country, he said the number of referees and officials in all sports is decreasing. In addition, the pool of referees is getting older, and young referees have it worse.

“We lose too many young referees who are tired of the abuse they face on the youth soccer fields, and so you have guys like me, who are 60 and pretty fit keeping up with 18-year-olds,” he said.

The Virginia High School League published stats from the 2016-17 school year stating boy’s soccer had 268 player ejections; the next closest sport was football with 157 ejections – about 100 less, he said. In boys’ soccer, there were 12 coach ejections for the same period. Virginia High School League has strict rules about cursing, he added. Players will get ejected if they use foul language toward a referee, an opponent or a teammate. “If you get ejected for using foul language, it’s a three-game suspension,” he said.

But the problem is not just in high schools. “Some of the things I have seen in the last couple of years really have focused on the bad behavior of parents at youth games. And when parents at youth games are spending the afternoon yelling at the referee, then the players feel they have the license to do this,” he said.

GLASS is a native of Annandale, played soccer at Thomas Jefferson High School as well as the College of William and Mary, where he majored in government and philosophy. He got a law degree from GMU and for 34 years has been in private practice (Ben Glass Law) specializing in personal injury law and disability insurance. He has nine children – five biological and four adopted from China (ages 36-16) – with wife Sandi.

There is no charge to participate in the Sportsmanship Challenge, but schools must confirm their participation by visiting SportsmanshipChallenge.com and completing the web form. Only authorized representatives of the schools are allowed to confirm their school’s participation. For more information, visit JustAskBenGlass.com or contact BenGlassLaw at 703-988-6414.