Handle with Care in Potomac
Votes

Handle with Care in Potomac 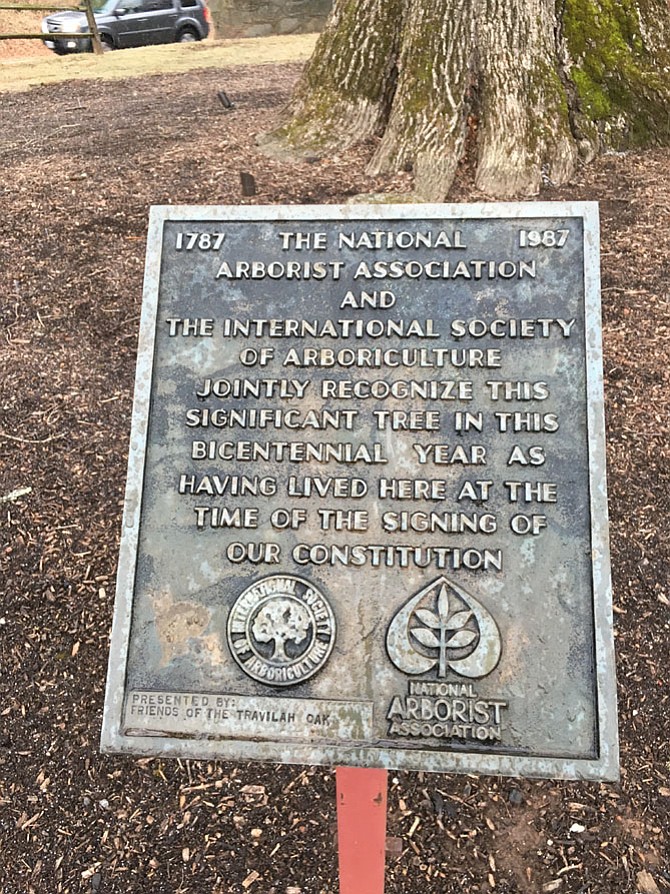 The plaque placed in front of the Travilah Oak attests to its age. Photo by Peggy McEwan/The Almanac 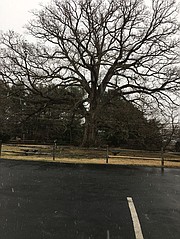 The Travilah Oak near the intersection of Travilah and Glen roads was recently adopted by Bartlett Tree Experts. The company will perform maintenance necessary to keep the almost 300 year old tree.

Local businessman Guy Semmes has long been an advocate of the Travilah Oak, a large White Oak in the Potomac Oak Shopping Center at the corner of Travilah and Glen roads in Potomac.

But recently he has become concerned about the care of the tree.

The Travilah Oak is believed to be over 285 years old and, as measured in January 2011 by the Maryland Big Tree Program, has a circumference of 18 feet, 4 inches; a height of 78 feet and a crown that stretches 108 feet, according the Travilah Oak Wikipedia page.

“It really needed some general attention,” Semmes wrote in an email. “I reached out to Bartlett Tree Experts and they quickly offered to adopt the tree.”

Michael DeGregorio, from Bartlett Tree Experts, and Semmes met at the tree in late December to discuss a plan for the tree maintenance.

“I know that tree very well,” DeGregorio said. “I’ve worked in the Potomac area for the last five years or so and drive past it several times a week.”

DeGregorio said he has even stopped to eat lunch under the tree in good weather.

“I’m just happy we are able to take care of it,” he said. “We like to take on projects like this … maintaining large old trees.”

The White Oak is the Maryland State Tree. It was represented by the Wye Oak, believed to be almost 500 years old before being felled in a thunderstorm in 2002. It was the largest White Oak tree on record in the United States. It measured 31 feet, 10 inches in circumference, was 96 feet tall and had a crown of about 119 feet according to the Maryland Department of Natural Resources website. The current state champion is in Cecil County.

The current Montgomery County Champion White Oak is growing at the intersection of Route 355 (Wisconsin Avenue) and Beech Drive.

The maintenance plan will start with the pruning of weak and dead limbs and an update on lightning protection, DeGregorio said.

“In the growing season we will make sure it gets the nutrients needed,” he said.

Semmes is very happy that Bartlett Tree Experts has adopted the Travilah Oak, he said.

“This is something they do all the time,” he said. “It was just hard to keep up with.”