The Other Alexandria: Herbert P. Tancil – The Mayors’ Colored Barber 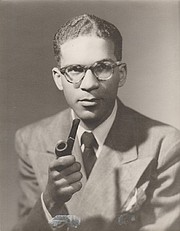 Herbert P. Tancil was the colored barber for 10 mayors in Alexandria from 1876-1908. His barber shop was first located at Princess Street, next door to the Alexandria Gazette. The business moved several times until it finally ended at 427 King St. Herbert’s King Street location was a testimony to how far he had come in the barber business. He was now located near his white clientele which included the mayor and local businessmen on King Street.

A famous incident took place at Herbert’s barber shop on King Street in 1895. It was an altercation between John Underwood and the ex-mayor, Henry Strauss. John hit the 60-year-old ex-Mayor Strauss inside the barber shop. Then the ex-mayor knocked John down on the floor. The patrons of the barber shop and Mr. Tancil all rooted for the ex-mayor.

Herbert Pike Tancil was born in Georgia in 1853. He lived with his relative, Isaac Tancil in Alexandria in 1870. He started his barber apprenticeship under a colored barber named Thomas E. Dulaney in 1872 when he was 19 years old. Mr. Dulaney had been in the barber business since the 1860s studying under a well-known white barber named, Harrison Jacobs.

In 1874, Herbert married Mollie H. Buster in Washington, D.C. They built their home at 1012 Oronoco St. in Alexandria. The couple had eight children. Their son, Herbert P. Tancil II went into the barber business and Herbert’s other sons, Park and Granville Tancil attended Howard University and became medical doctors.

The northern Virginia area experienced heavy snowfall on Dec. 22, 1908. Herbert P. Tancil closed his business for the last time and walked home from King Street to Oronoco Street in the heavy snow. He made it home but he suffered from a heart attack and died. The newspapers reported his death by saying, “Herbert P. Tancil, one of the best known colored residents of Alexandria … death is supposed to have been hastened by overexertion in walking from his place of business to his home in the face of heavy snow.” He was 54-years old.

Mr. Tancil’s funeral was at Alfred Street Baptist Church. The service was conducted by Reverend Alexander Truatt and three other ministers. Many people attended his funeral including his clientele. The Virginia State Delegate James R. Caton was called on to make remarks on the exemplary life led by Herbert Pike Tancil. Mr. Tancil had been a barber for 35-years.

Mr. Tancil’s son, Herbert Pike Tancil II continued in the barber business located at 102 South St. Asaph St. until his death on Dec. 25, 1947. Unlike his father, he was a member of Meade Memorial Chapel (Meade Memorial Episcopal Church). At the time of Mr. Tancil’s death, he was 74-years old, he lived at 1316 Prince St. His son, Herbert P. Tancil III did not go into the barber business; he went into the Federal government. He moved to Washington, D.C. After he retired from the Federal government, he worked for the D.C. government as a counselor for an orphanage. Herbert P. Tancil III was a devout Episcopalian and a member of Savior Episcopal Church in Washington, D.C. On Aug. 20, 1989, Herbert III died at the age of 68.

Today, Herbert P. Tancil III has a son, Herbert P. Tancil IV. Herbert IV was the first Hartford Life Insurance Company’s African American group sales manager in Detroit, Mich. in 1985. He retired from the insurance company in 2004 with 26 years of service. In retirement, he continues his Hartford relationship as a contract benefits counselor representing the company during open enrollments, benefit fairs and meetings. He lives in Buckeye, Ariz. with his wife, Marcia, sons, Hebert P. Tancil V and Chad L. Tancil and their grandchildren including grandson, Herbert P. Tancil VI.

Indeed Herbert P. Tancil I, left his mark on Alexandria as the barber for 10 mayors.