Activism in Action in Reston
Votes

Activism in Action in Reston 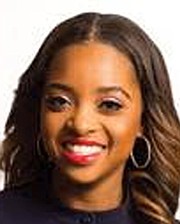 "...we will not remember the words of our enemies but the silence of our friends." — Tamika D. Mallory, co-chair for the Women's March on Washington, quoting Dr. Martin Luther King

Tamika D. Mallory, a fiery activist for social justice, champion of the Civil Rights Movement, and one of four co-chairs for the Women's March on Washington was the Keynote Speaker for 33rd annual Martin Luther King Jr. Celebration held on Jan. 15, 2018, at CenterStage, located in Fairfax County's Reston Community Center (RCC) at the Hunters Woods Village Center, Reston.

Mallory, who President Obama had publicly applauded as a leader, addressed the sold-out crowd as she delivered her keynote speech touching on topics including gun violence, gender and racial inequality, and the need to get “uncomfortable” in these strange times.

"There's a little tension in all of us, and people in good moral consciousness cannot let our country go up in smoke," Mallory said. She explained that although things that divide us are not as prevalent as before so much remains the same. “Today we celebrate Martin Luther King; we reflect on his body of work...and his death."

Mallory recalled how King realized he was not in a “dream” but a disaster. She said that he woke up to the economic condition and became laser-focused on what black people need. She told how at one point King was called "the most dangerous man in America."

Mallory stressed to the audience, who applauded her throughout her speech, that it is not the time to give up but instead to be concerned about others. "Either we go up together, or we go down together," she said.

Mallory spoke about the impact President Trump's recent Twitter blast had. "He reminds us [through his words] that hate still lives in this world," she said. Mallory added that inequality " ...is still the fabric of this county."

Addressing the audience, Mallory said that what is needed is to "...put a little more action in our activism." She stressed that there are ways each person in the room could be part of the effort citing the need to check voting records of politicians and making sure the politicians are working on the individual's behalf.

Mallory talked about how on the upcoming first anniversary of the Women's March they would not be marching. Instead, they are going to "Turn marches into movements." She said this year they would present a "Power to the Polls event" in Las Vegas, Nev. aimed at registering voters in swing states, Nevada being one of them, and facing voter suppression laws.

As Mallory concluded her 45-minute speech, she urged those in the audience to be as loud as they could be; to speak up for others and work on behalf of those who have less than they do, saying in the end "...we will not remember the words of our enemies but the silence of our friends."

At the conclusion of the Keynote Address, a community lunch was served with the welcome by Beverly Cosham, chair, RCC Board of Governors, followed by U.S. Rep. Gerry Connolly (D-11). Supervisor Catherine Hudgins (D-Hunter Mill) could not attend.

Corrections: There were originally two errors in this report on Dr. Martin Luther King Birthday celebrations in Reston. In a report on a keynote speech by Tamika D. Mallory (“Activism in Action”) it should have been noted that she was quoting Dr. King by saying “...we will not remember the words of our enemies but the silence of our friends.” Supervisor Catherine Hudgins (D-Hunter Mill) could not attend the community lunch served on the occasion.