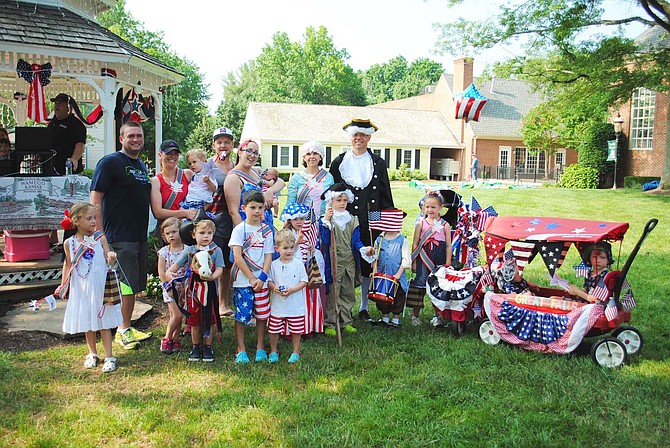 Many groups, organizations and businesses walked together to celebrate Independence Day. 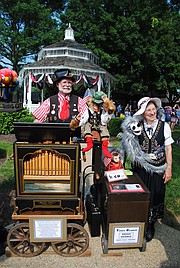 Organ Grinder, Terry Bender; his wife, Jan Bender; and their monkey, Wastel, played songs for the celebration. Bender has been an Organ Grinder for 25 years.

The Best Neighbor Float winners with their Willy Wonka-inspired float. 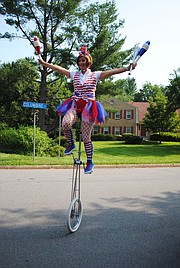 The “Unicycle Lady,” Lisa Polinori, came from Baltimore, Md. to join in the parade.

The Celebrate Great Falls Foundation had their own float topped with a white gazebo.

The day began with the annual 5K Walk/Run hosted by the Great Falls Trailblazers. The free walk/run began at 8 a.m. at the Freedom Memorial at the library and took participants throughout the local trails. Senior at St. Albans School in Washington, D.C. and Great Falls resident Jonathan Merril, was the first to finish. The young man who is on the running team at his school, asked if it was alright to do another lap once he crossed the finish line.

“It’s a fun and free run. We want everyone to enjoy themselves,” said Trailblazer member, Julie Ben-Achor, as she cheered runners at the finish line.

After the race, people headed to the Village Center to watch the Little Patriot Parade, which was sponsored by the Great Falls Friends and Neighbors. The best dressed participants were awarded prizes. The categories were the Star Spangled Family, Most Patriotic, Little Liberty, Most Creative, Little Miss Betsy Ross, Young George Washington, Best Decorated, and Most Patriotic Baby.