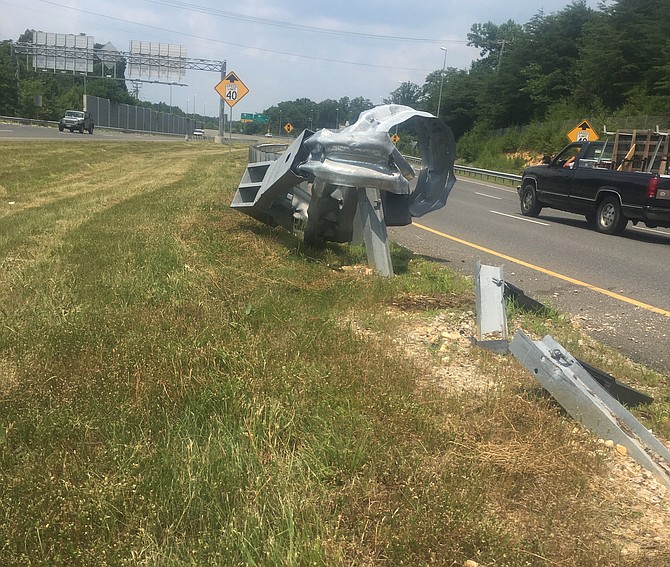 On the Fairfax County Parkway, this guardrail remains a tangle of steel, but there are traffic cones on site to warn motorists. As this story went to print, this guardrail wreckage was repaired. Photo by Mike Salmon.

This is what the guardrails look like before being hit, with the built-in shock-absorbing features in plain sight.

On the northbound side of the Fairfax County Parkway just past Barta Road near Springfield there is a crunched-in guardrail that has signs of a car crash but the design and engineering behind these types of guardrails may have lessened the severity of the crash.

These guardrails, called the “MASH Terminal” or the “NCHRP 350 Terminal,” can be seen all over the area and are a safety feature overseen by the Federal Highway Administration. According to Marshall Herman, spokeswoman for the Virginia Department of Transportation (VDOT) in Richmond, NCHRP 350 and MASH terminals are designed to flatten the rail and/or move out of the way when hit head-on to reduce the momentum of a vehicle. They will bend out of the way if a vehicle hits the terminal at an angle.

There have been issues with a particular type of terminal known as the “X-Lite Terminal,” and VDOT is currently on track to replace 280 X-Lite Terminals in 2018, according to Herman. By the end of 2019, VDOT will replace the remaining X-Lite terminals on state-maintained roads with speed limits of 55 mph or higher.

As safety standards are becoming more commonplace through the years, roadside guardrails have come a long way, just as the cars themselves, to lessen or prevent injuries. In 1948, the first seat belts came out, but then only had the lap belt until the three-point lap and shoulder belt were introduced in 1959. It wasn’t until the early 1970s that car seats were equipped with headrests to address the severity of whiplash when hit from behind, or a buzzer to remind passengers to fasten seat belts.

In a October 1998 U.S. Department of Transportation memo, the guardrails underwent change as did sign posts that break away easily.

The crushed guardrails seen around Fairfax County are examples of them working as intended, according to Tony Dorsey of the American Association of State Highway and Transportation Officials (AASHTO). These types of guardrails are “designed to keep the car that strikes them from going back into the traffic,” he said. Manufacturers are always trying to perfect them as well. “They are constantly being redesigned,” Dorsey said.

Although they crunch in like an accordion, they do not pop back out, so damaged guardrails have to be replaced and there doesn’t seem to be a schedule in place for that. According to Herman, VDOT’s repair timelines are flexible, as damaged terminal repairs are scheduled based on damage severity, risk factors (such as roadway speed and classification), weather, and manpower/equipment availability.

“VDOT is committed to protecting the traveling public on our roadways,” said Herman. Although the path to replacing the damaged guardrail varies from state to state, the motorist that hits the guardrail is sometimes liable. “The owner of the car receives notice,” said Dorsey, and then it’s turned over to the insurance company.

Much of the Fairfax County Parkway goes through the Springfield District, and Supervisor Pat Herrity (R) sometimes gets word of the damaged road items like a guardrail, and the staff reports it to VDOT’s NOVA District Administrator’s office. Peyton Onks, the transportation coordinator in the Springfield District office, follows it up from there. “If I haven’t heard anything from them after a week or so, I follow up with them to ask for an update,” she said.