‘The Iron Man’ in Mount Vernon 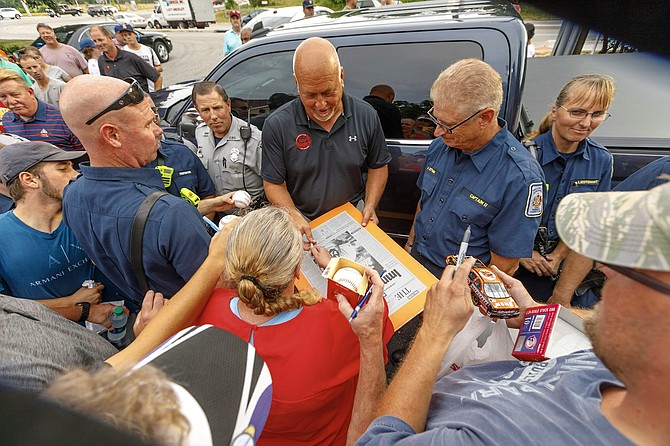 Cal Ripken Jr., center, signs a piece of memorabilia for retired Fairfax County firefighter Karrie Boswell as other police and fire personnel look on during a July 16 appearance by the baseball legend at Roy Rogers Restaurant in Alexandria celebrating the franchise’s 50th anniversary. Photo by Mark Mogle.

“With their philanthropic side, this seemed a natural match.” —Cal Ripken Jr. on his partnership with Roy Rogers Restaurants

The line began forming at 10 a.m. and steadily grew into the hundreds as fans from around the region gathered at the Roy Rogers Restaurant on Richmond Highway to await the arrival of “The Iron Man” himself — baseball Hall of Famer Cal Ripken Jr.

For two hours on Monday, July 16, Ripken Jr. signed autographs and posed for photos as part of the 50th anniversary celebration of the founding of the fast food franchise.

“Going back to my days in the minor leagues, it was always a special night out with my Dad to go to Roy’s after a game,” Ripken said. “Now I’m excited to partner with them to raise money for the Cal Ripken Sr. Foundation.”

The Alexandria location was the first in the area to feature an appearance by Ripken Jr.

“We found out about a month ago that Cal would be coming to our store,” said Jason Hunt, who owns the franchise with his brother Stuart. “I grew up collecting his baseball cards and was very excited that he was coming here. He’s a hometown hero and this has been quite a response.”

Fans of all ages waited in a line that wrapped around the building for a chance to meet Ripken Jr. including Alexandria resident Chase Baake, who was celebrating his 8th birthday with his mother Paula.

“I am so excited that he signed my baseball,” said Chase, who said he learned of the event on Facebook. “This is the best birthday ever.”

Ripken Jr., who played for 21 seasons with the Baltimore Orioles, set one of baseball’s most famous records in 1995 when he surpassed Lou Gehrig's mark of 2,130 consecutive games played, earning the nickname “The Iron Man.” He retired in 2001, the same year he and his brother Billy founded the Cal Ripken Sr. Foundation in honor of their father.

The Maryland-based restaurant chain announced the partnership with Ripken Jr. earlier this year as a way to celebrate the history of the franchise and raise money for the Cal Ripken Sr. Foundation through the sale of a commemorative 44 ounce drink cup. For each cup sold, 50 cents will be donated to the Ripken Foundation, which uses sports-themed activities to bring police officers, youth partners and underserved children ages 9 – 14 together through youth development and mentorship programs.

“With their philanthropic side, this seemed a natural match,” Ripken Jr. said of Roy Rogers.

According to Roy Rogers co-president Jim Plamondon, the company was founded in 1968 with the first restaurant opening in Falls Church. There are now 53 restaurants in six states with plans to expand.

“Our father founded the company when he was an executive with Marriott,” said Plamondon, who runs the company with his brother Peter Plamondon. “We grew up in this area and can relate to the relationship Cal had with his father and his connection to the community.”

A scheduled Quick Ball clinic for youths was canceled due to rain, giving Ripken Jr. more time to meet fans and serve orders at the restaurant counter.

“Partnering with Roy Rogers made sense since we share the same values,” Ripken said. “I’m glad to be here to help them celebrate their 50th anniversary year.”