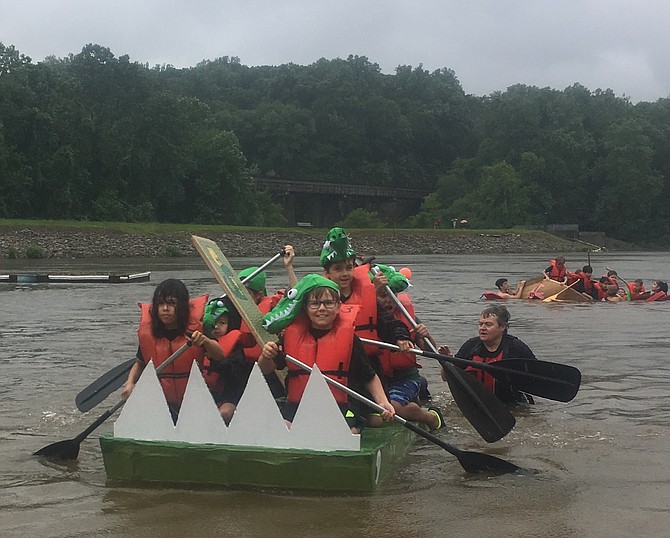 The Navigators sported alligator hats on the water as they landed on the beach. Photo by Mike Salmon.

“Jameson and the Argonauts,” crowded under the tent until it was their time on the water.

From the SACC (school aged child care) at Oakview Elementary School in Fairfax, the crew from the “X Wing” were ready for action.

In the parking lot of the American Legion Post 176, Glenn Corcoran stood by his 1982 DeLorean, and explained the “flex capacitor,” that flashed multi-colored lights between the two seats. The DeLorean cars are collector’s items with a speckled past. The founder, John DeLorean, had financial problems in the early 1980s, and the stainless-steel car was the star in the “Back to the Future” movie series starring Christopher Lloyd and Michael J. Fox.

The capacitor was a time-travel device from the movie.

“I made that,” said Corcoran, “the blue light really pops,” the Springfield resident said.

The DeLorean was among about 25 cars at the show this year, which was subdued due to the rain that was forecasted for the whole weekend, but didn’t show up until later Saturday afternoon. Next to the car show, the fair also stretched out into the Springfield United Methodist Church parking lot, where there were shaved ice, food trucks, handmade gifts and local Civil War history books at a tent occupied by the author Don Hakenson.

In 1966, at age 14, Hakenson was helping others clear a field to play baseball over by present-day Kingstowne and he found an artifact that was thought to have come from the Civil War and he’s been a local historian ever since. “I found a revolver when I was 14 years old, all rusted, I believe it was Civil War related,” Hakenson said. As a student, he’d read Civil War history about Alexandria and Richmond, but was looking for events a little closer to home so he started with the Beulah Street area where he grew up and branched out from there. He’s authored several books and is now researching the Mosby Raiders’ activities in Fauquier County. “My hobby got out of control,” he said.

The Lake Accotink supporters also had a tent, and looked forward to the Cardboard Boat Regatta the next day, a well known highlight of Springfield Days. “The regatta brings the community together,” said Richard Hildebrand. The county will make a decision on the future of the lake this coming fall.

Sure enough, the rains came Sunday morning, but the beach at Lake Accotink was full of eager sailors and their cardboard masterpieces. The Cub Scouts from pack 1140 at Kirkwood Presbyterian Church in Springfield crowded under their tent, soaked and shivering. Their boat, “Jameson and the Argonauts,” was named after their captain Jameson Searight, who lead the team.

Scott Ellis, father of one of the team members, wasn’t concerned with the rain. “This boat was going in the water no matter what,” he said.

Another boat, the “Navigator,” was full of sailors with gator hats and they won the first heat. They were from the co-ed scouts from Ethical Society Troop 99, which had scouts from all over Fairfax.

The smiles and upbeat feeling was shared from everyone on the beach, so the regatta had the community feel that this event was famous for throughout the years. Sharon Bulova, the chairman of the Fairfax County Board of Supervisors, was there as well early on for the boat judging portion.

Nancy-jo Manney, from the Greater Springfield Chamber of Commerce, has been involved with the planning and execution of the Springfield Days festival for 20 years, and has monitored the forecast almost every time. In the past, the regatta has been postponed, and artists scrambled to pack up when a quick storm popped up, “but all in all, we’ve typically had weekends that are largely cooperative,” she said.