12 Shades of Blue in Alexandria
Votes

12 Shades of Blue in Alexandria 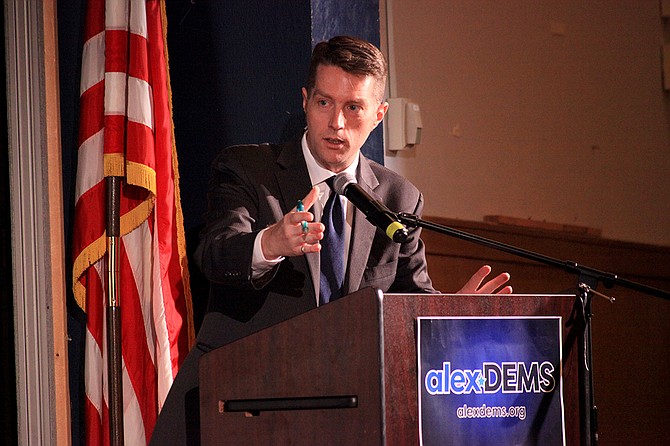 They may all be Democrats, but don’t think the 12 candidates for City Council are on the same page. At the June 5 City Council debate at Hammond Middle School, bitter divisions emerged between candidates. The debate saw incumbent candidates and a few establishment-supporting newcomers set against a group of challengers taking a more hardline stance — that the current City Council had lost the trust of Alexandrians.

There were policy topics nearly everyone agreed on. Nearly every candidate supported the idea of two-year budgets. Most candidates focused parking policies around minimum spaces rather than maximums. Every candidate hated the Mark Center Building as a paragon of bad city design.

But when it came to the vote on enforcing the limit on public speaking at public hearings to 30 minutes at the start of the meeting, a controversial topic during the mayoral debates, the cracks between the groups started to emerge.

Incumbent City Councilmen Paul Smedberg, John Chapman, and Willie Bailey all stood by their votes supporting Vice Mayor Justin Wilson’s proposal to enforce the City Council’s 30-minute rule for the opening public comment section. Comments after that period were held until the end of the meeting.

Incumbent Redella “Del” Pepper was more hesitant on the topic, saying she didn’t like the idea of squeezing the comment into a set time period. The proposal found support from some of the new candidates — Dak Hardwick, Elizabeth Bennet-Parker and Amy Jackson.

“I agree with the change,” said Hardwick. “On the published agenda there is business that needs to be conducted to have an efficient and transparent [government].”

But among the other challengers, even those who supported the change overall, it was that something was wrong with the city’s public engagement process.

“I agree with the change,” said Canek Aguirre, “but it wouldn’t have been needed if the city as a government was properly engaging with residents and listening.”

“Transparency is critical, and is close cousin to inclusiveness” said Matthew Feely, “which means more participation; not less. [Council] should liberalize the amount of opportunity [for public engagement].”

The stratification of the council candidates became more crystallized when it came to the prospect of new lights on the T.C. Williams sports field, a divisive proposal to use stadium lighting at the sporting field behind the school. The new lights would allow the field to be used at nights for games and practices, but would also go against a promise made years ago to the historic neighboring African-American community that was forcibly displaced to make room for the school.

Each of the incumbents expressed support for the lights. Newcomers Jackson, Hardwick, Parker and Cannek again found themselves agreeing with the incumbents in favor of lights. Meanwhile, Mo Seifeldein, Feely, Robert Ray and Chris Hubbard were firmly opposed.

“Governments are run on trust,” said Seifeldein. “We made promises and now we’re trying to take that back. No.”

During the debate, Seifeldein, Feely, Ray and Hubbard formed an impromptu coalition of heavy criticism aimed at the city’s transparency and what they attacked as poor planning over several years. Finally, the tension erupted into a heated shouting match between the hardline opposition and incumbents.

“I know there are frustrations, but some of the comments show a lack of understanding for how city operates,” said Smedberg. “We have staff that spends hours meeting with neighborhoods. I know it’s hard, but we do our best to listen to folks, to understand concerns and so does staff.”

Smedberg’s comment sparked debate. Seifeldein said the frustration is less with staff than with the transparency on the council, even arguing that staff’s underfunding of various departments was part of why staff was operating at a diminished capacity. This drew the normally laconic Bailey into a shouting match with Seifeldein.

“You say facts matter,” said Bailey. “The fact is we’re doing everything we can with the budget we have. It’s easy to sit back and say you’re going to do this and do that when you’re not sitting on the dais.”

“Acknowledge facts and tell the truth,” Seifeldein shouted back. “I’m not talking about whether you have the money.”

For several minutes there was unintelligible shouting between the groups, with things like turn order and time limits all but forgotten. When the final question asked candidates what they’d learned from the evening, the mounting tension and eruption between the candidates was the elephant in the room.

Hardwick said that Alexandria is a community of passionate people.

“If we want to change the world, we have to start in our neighborhoods,” Hardwick said. "I am very proud of the campaign that we have run, from the outside validation and endorsements we've received to the issues that we've learned about in the community."

As the primary looms closer, voters remain undecided on the City Council race.

“Many of my friends probably have a solid four and are still thinking how they are going to make those last two votes,” said Sandy Marks, secretary for the Alexandria Democratic Committee (ADC).

Louise Black, a voter attending the debate, said the debate further set her against some of the candidates.

"One of the things I learned this evening is how much the candidates don't know about the city's processes,” said Black. “All of the non-incumbents, with the exception of Dak and Canek, the rest don't seem to know how the city works."

ADC Chair Clarence Tong expects higher turnout that the 2012 and 2015 primaries, and said that civic engagement has increased since the 2016 presidential election. There are six City Council positions in play on June 12, with winners moving on against Republican and Independent challengers in the November election.

"The fact that we have a very competitive mayoral and council races will add to the turnout,” Tong said.

"Last year was the highest turnout for a statewide election, and from our membership perspective we had to raise the cap because there was so much interest in joining our committee. We filled 490 of the 500 spots, so it's a great thing to see that level of engagement.”