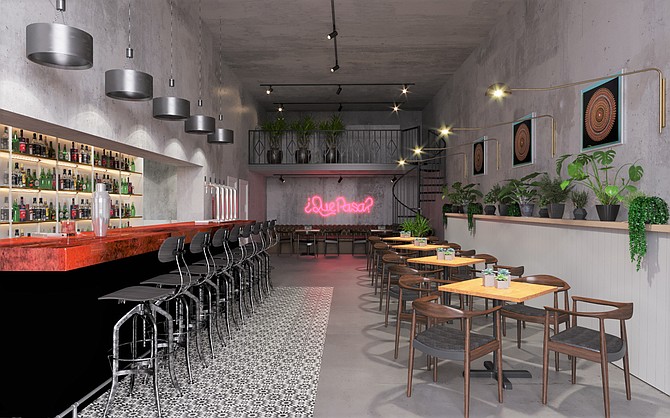 Chop Shop Taco will offer tacos, tortas and more once it opens in the Madison Collective this summer. Photo contributed

Block by block, the Parker Gray neighborhood continues to receive new residents. The latest result of recent growth within the thriving community: The Madison Collective, a development playing host to several businesses within one block.

The development, created by Avanti Holdings, is slated to open this summer at 1008 Madison St., adjacent to the corner of North Henry Street. And its offerings will be as diverse as the neighborhood it calls home: A taco shop, a juice bar, a fitness gym and a tattoo parlor will all be opening within the coming months.

“What we’ve been trying to do for a long time is to keep Alexandria current, to keep it in line with other options in the D.C. area,” said Madison Collective principal owner Teddy Kim. “…Alexandria is quickly becoming more known as something that’s a little different than the other pockets (such as Georgetown or the D.C. Wharf).”

Kim, a resident of Parker Gray, is not new to the area’s business scene: He and his business partners are the founders of nearby Mason Social. And between Mason Social, Lost Dog Café, the Solidcore gym and Sugar Shack, the new Madison Collective won’t be alone in its quest to draw neighbors in — but its offerings are different from what’s currently available, as well.

Chop Shop Taco, its name an homage to the automotive chop shop that sat on the development’s land for so long, will offer tacos, tortas and other Latin-American-inspired food for lunch and dinner. Zweet Sport will help diners work off their meals with a cycling studio and fitness space. Grateful Kitchen will offer an array of juice and coffee via a walk-up window, and James Marlowe of Marlowe Ink is bringing his tattoo artistry to Parker Gray in a new studio.

“It’s an interesting mix,” said Judy Noritake, president of the nearby Braddock Metro Citizens’ Coalition. “I think that Avanti and Teddy Kim…has a real understanding of who lives in the neighborhood and where the neighborhood should be going from a retail standpoint.”

Madison Collective’s storefronts will open this summer, some perhaps ahead of others. And Kim says he’s looking forward to the impact the development will make within the neighborhood and the city.

“I’m most excited about (Madison Collective’s) diversity,” Kim said. “I think that’s representative of the diversity of Alexandria.”