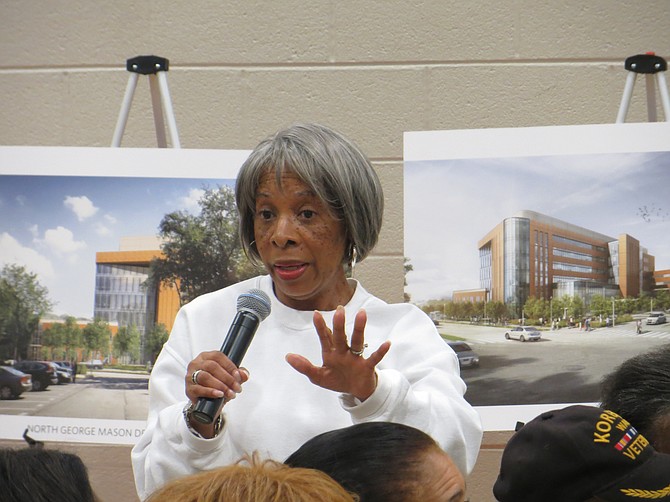 Saundra Green, a resident of Edison Street, said the VHC’s dismissal of community concerns felt like a slap in the face. Photo by Vernon Miles.

“Those brown boxes aren’t just boxes; we live there,” said Mario Woldarsky. “Every day I see the ambulances from Prince William County come in here. They are not from this community. They are not taking the beating our community is. You are changing the rules. That’s not fair to me, to my neighbors.”

View of the hospital from N George Mason Drive and 19th Street, called “the wall” by local residents.

It wasn’t much of a Q&A. The June 11 open house with the Virginia Hospital Center (VHC) was billed as a question and answer session for neighbors about the hospital’s expansion plans. There were a lot of questions and little by way of answers from Arlington County or the hospital. For over an hour, dozens of neighbors asked questions and raised concerns about the scope of the expansion, but were met with silence.

The VHC first proposed expansion plans in 2015, growing into the adjacent 5.6 acre Edison site owned by the county. Since then, the surrounding community and civic associations have been involved in the process trying to pressure VHC into a design more amenable to its neighbors. But as VHC’s reached the halfway point of the review process before it goes to the County Board in September, neighbors say they’ve seen very little compromise from the hospital.

“We started the task force three years ago with the three civic associations in the area to ensure the work didn’t adversely affect the neighborhoods,” said Tracey Greiner, representing the John M. Langston Civic Association. “From the get-go, our main concerns were traffic, pedestrian safety, and massing.”

Greiner said he’s concerned about how little of the site uses underground parking and that portions of the Edison site are being maintained as a future build pad for more development. At previous meetings, hospital representatives stated that larger scale undergrounding of parking and facilities would be prohibitively expensive. Adrian Stanton, vice president of business development and community relations for the hospital, said at a Committee of 100 meeting earlier this year that cost for a parking garage triples as it starts to go underground. Greiner acknowledged this, but noted that there was substantial undergrounding on the Ballston corridor.

Greiner said there are simple solutions to help appease neighbors. The garage is divided currently, with an entrance and section for patients and visitors only and another section for hospital staff. Greiner said eliminating that distinction will help relieve the burden on 19th Street, where the staff parking entrance is located.

James Perkins, who lives across from one of the parking entrances, nodded to his toddler and said the increased traffic concerned him about the safety of his child.

“They haven’t changed the plans at all or listened to our concerns,” said Perkins. “They didn’t really get the feedback.”

Perkins said he hoped for a traffic light at 19th Street and N. George Mason Drive, but while residents said it was necessary already, Arlington staff has said the traffic on the street doesn’t currently or under the new designs merit a traffic light.

The main goal for many residents was to move traffic off the smaller streets.

“We want the entrance on 19th Street closed,” said Avis Chatman. “All this traffic is 24 hours a day and that street is narrow. It cannot handle that amount of cars.”

19th Street is currently a narrow yield street. The hospital plans include expansion of the street, widening it six feet to improve traffic circulation and creating parking on both sides of the street. The VHC plans have included several transportation improvements to the surrounding area. In addition to the widening, there are several pedestrian improvements on the nearby sidewalks. While 19th Street is unlikely to get its traffic light, there is a new traffic light and pedestrian intersection at George Mason Drive and the Outpatient Pavillion Driveway. There is also some north/south vehicle and pedestrian connection through the site. But residents say the improvements do little to address the underlying issues.

“It’s discouraging,” said Sharon Dorsey. “We approached the hospital for years to ensure our concerns would be taken into account [in the designs]. But virtually nothing was taken into consideration. They submitted one design and have essentially just tweaked it.”

Outside of the parking, residents also remain concerned about the scale of the building. One particular sticking point was the solid brick exterior along 19th Street residents have called the wall.

Several speakers at the meeting drew comparisons between the wall design and the kinds of walls that segregated the historic nearby African American communities from the rest of Arlington. There was more than one reference to the fact that several of the speakers remembered a time when VHC would not allow black residents of Arlington to be born in the hospital.

“We’ve yelled about height and setbacks, that we want them to put one more level underground in the garage,” said Dorsey. “They’re concerned about what kind of trees we want planted when neighbors are worried about an eight-story building. It’s discouraging.”

The dozens of residents in attendance were unanimously opposed to the current VHC designs, though some on N. George Mason Drive resented the insistence of the other neighbors of pushing the massing towards their four-lane street. One resident from George Mason noted that while it’s a larger road, it’s still heavily residential. Alexandra Bocian, president of the High View Park Association, said whatever street residents are on: they are all part of the same community.

“We want things that are not out of possibility,” said Bocian. “It might cost money, but you’ve also wanted the land. We’re willing to work with you. Three civic associations have worked inclusively together to try to spell out what we want and how we want it. What we’re asking for in these Q&A’s are not resulting in anything. Want to make sure this happens in a way that everyone is respected.”

While the hospital representatives said little during the Q&A, only answering a question about a crisis unit at the hospital, Stanton said afterwards that the concerns of the community had been heard.

“There are a number of things we’re working with county staff on [related to] what was said tonight about massing, setbacks, and access points to the campus,” said Stanton. “We’re meeting with the county on a weekly basis and we hope for a resolution to that before we go to the County Board in September.”

Nancy Iacomini, a member of the Planning Commission who helped to moderate the event, said there’s still work to be done on the designs before the County Board review in September.

“The community has been very consistent with its concerns,” said Iacomini. “There’s support for the hospital, but concerns about the shape is it taking… We hope to see the hospital continue to work with staff and see movement as we move towards September. The neighborhood can’t get 100 percent of what they want, there’s give and take, but things like massing towards the middle of the facility and more of a campus style can be achieved through design. This doesn’t have to be a horrible design, but we can’t do it alone: the hospital has to work with us.”