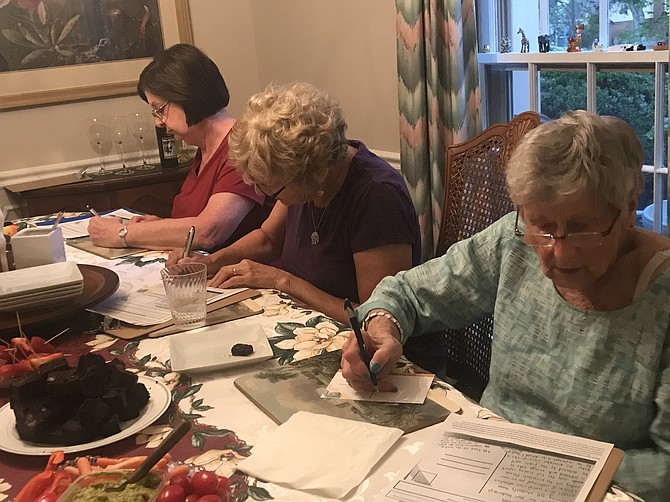 Schools throughout the State of Maryland are facing poverty issues, a shortage of qualified staff and declining student achievement. Much of the decline in the system is due to the shortage in funding for public schools.

Strong Schools Maryland — a non-partisan statewide grassroots advisory organization composed of teams of community leaders — is working to elevate education to the number one issue in the 2018 elections. A Potomac team of citizens is one of the Strong School Maryland teams that have been meeting since September, 2017 to discuss current educational topics, make recommendations and take action.

In 2016, the General Assembly and Gov. Larry Hogan created the Maryland Commission on Education and Innovation, better known as the "Kirwan Commission." This commission, led by ​William "Brit" Kirwan, the former chancellor of the University System of Maryland, has been charged with examining how to make Maryland’s a world-class education system.

The commission will be recommending legislation to update the current funding formula as well as advising where Maryland should invest resources to meet the needs of every student. Such an examination of the funding formula has not been completed since 2002.

The Kirwan Commission has discussed the relevant issues and in their Phase 1 report proposed that Maryland set the following as priorities: invest in early childhood education, hire high quality and diverse teachers and leaders, create college and career readiness pathways, provide more resources for at-risk students, and provide governance and accountability. Phase two of their work is to determine how much each of their recommendations will cost and then present a final report to the governor and the General Assembly.

Strong Schools Maryland was created by Kirwan to provide grassroots input and advice on solutions to changing and improving the school system throughout Maryland to the Kirwan Commission. Individuals and organizations from around the state have been recruited to form teams which meet monthly to learn about and discuss current educational issues. More than 100 teams in 14 counties were created. Each group is provided with the same discussion materials and action items. In addition to their monthly meetings, these teams meet with legislators in Annapolis and in their respective counties, and interview candidates for their positions on education reform.

The Potomac task force consists of Deborah Stine, Kathy Deerkoski, Robin Gordon, Cathy Kazmierczak, Lynda Honberg, Gael Cheek, Barbara Noveau, Trip Rothschild and Samir Paul. They met on May 29 to discuss Bill HVB 1415 (The 2018 Commission on Innovation and Excellence in Education (Kirwan) Legislation) which has passed both the House and Senate and is waiting for the Governor’s signature. This bill extends the life of the Kirwan Commission through 2018 to provide their funding report. They are hoping to complete the publishing of the report by Sept. 5 in order to give time for public debate before the November election. Strong Schools Maryland supports the commission publishing their recommendations far before the November election.

The group also discussed Bill SB1122 – the Education Trust Fund “Lock Box” Fix which will be on the ballot in November. The “Lockbox” bill creates a ballot question in November to allow all Marylanders to vote to close a loophole through a constitutional amendment which will ensure that all gambling tax revenue will supplement the current school funding formula. This was approved by voters as the original intent of the casino revenue — but has never happened.

When casinos were approved for Maryland in 2009, the state’s share of the revenue from casino taxes was designated to be added to the educational budget to improve education. The voters were “gamed” on this because the money from gambling taxes flowed into the Education Trust Fund — but from there, it went into the general fund and was used for other purposes and not to supplement education. Maryland’s educational funding in the past six years has remained flat, even as Maryland’s six casinos have prospered. Nothing in the legislation passed required that school spending rise along with the growth in gambling tax revenue. Thus, the funding for schools was never increased as voters believed would happen.

“This $125 million is just a drop in the bucket with so many needs to be met – but it’s at least a beginning,” Stine said.

The team’s discussion centered on writing postcards to Kirwan to encourage the Commission to have the budget finished and ready to present by Sept. 5. “In order to distinguish among candidates and their priorities, we must have the commission’s budget and funding recommendations. Then we can ask the pertinent questions and understand the candidate’s thoughts about improving education and how he or she proposes to pay for it.” said Honberg.

Their postcards read, “Thank you for your leadership ensuring all students have access to a world-class education system. I understand you are not costing out the proposals. Please make sure the full funding report is published with enough time to be debated by the public will before the November election. This is far too important to be delayed.”

Other topics of discussion were that all members should try to attend Town Hall meetings to meet the candidates and ask them about their views on educational funding.

“Every time I go, I eliminate a couple of candidates,” said Stine. “We are looking for candidates who will make education their number one priority. We want legislators who will support Pre-K education, Career and College Readiness and more opportunities for at-risk students. We also need to know if candidates are planning to support passing Bill SB1122. And we need to make certain that voters understand the amendments they are voting on and what they mean to the future of education in Maryland.”