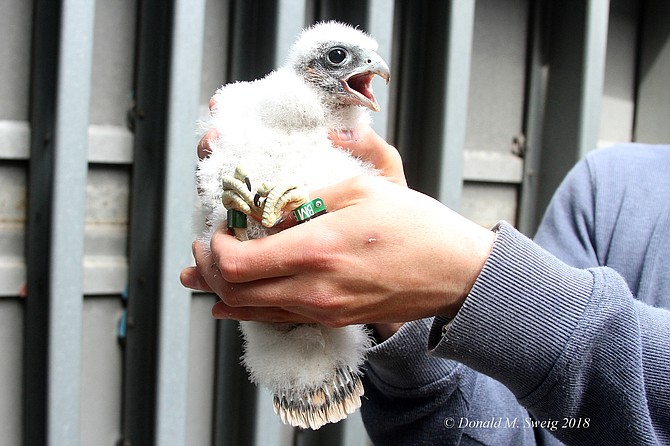 Dr. Bryan Watts is measuring the tarsus (leg) size of the Peregrine chick to determine the correct band size to use.

The four young Peregrine falcons were not even three weeks old. “About 19 or 20 days,” said Dr. Bryan Watts, the Director of the Center for Conservation Biology in Williamsburg, Va., which is responsible for managing the Peregrine falcon population in the Commonwealth.

Watts had driven up to Northern Virginia from Williamsburg early on Saturday morning, May 12, to band the falcon chicks in the nest on an office building in Reston. He was joined that morning by Steve Potts, a raptor biologist and Reston resident, now living in Great Falls, and Matthew Olear, a volunteer peregrine observer from Maryland.

Representing Boston properties, which manages the building upon which the peregrines were nesting, was Sapna Yathiraj. Boston Properties had graciously given permission for access and provided coordination and assistance for the banders to reach the birds. The banding team was admitted into the building early that Saturday morning and led up to the roof.

Once in place on the top of the building, Potts and Watts climbed down to the nesting ledge and placed each falcon chick in a separate cardboard containment box, which was then raised up to the roof by Matthew Olear. Watts then climbed back up to the roof and proceeded with the banding.

Each chick was removed from the containment box individually by Olear, and then examined, measured, and weighed by Watts. Watts also took a small feather and blood sample from each chick to add to an avian DNA database.

PEREGRINE and other raptor and avian banding is a management tool. Master banders, such as Watts, are licensed by the U. S. Geological Survey. In this capacity, Watts placed an anodized green, serially numbered, USGS aluminum band on the right leg of each chick. On each of the left legs he placed an anodized, bi-colored, green and black, aluminum band with alpha-numeric coding. Green is the peregrine banding color for Virginia and the alpha-numeric coding will allow the birds to be identified if and when the band numbers are read in the future.

Watts measured the size of the leg on each chick before applying the bands. In this case, a size-6 band for the males, and a size-7 for the larger females. These four chicks were evenly divided, two males and two females.

The sizing is important. If the band is too large it may slide around on the leg causing problems for the peregrine. If it is too small, particularly on the larger females, as the leg grows it will eat into the flesh. Both knowledge and skill are required to be a master raptor bander.

All the while the chicks were squawking loudly, particularly when they were being handled and banded. For such a small, young bird, a peregrine chick can make a lot of noise. Even at this young age, peregrine chicks have large feet with long, sharp talons.

And of course they squirm vigorously trying to get free as the banding process proceeds. Banding is not painful to the birds, they just don’t like being messed with. Who, or what, would?

ONCE ALL FOUR of the chicks had been banded, they were lowered in their individual boxes and placed back on the ledge. All the while, the adult female peregrine, which had been restricted from getting onto the nesting ledge, was sitting nearby, quite agitated. She returned to the ledge to check on her chicks after the banding was completed.

The scattered feathers on the ledge, the remains of over a dozen species of birds brought in by the adult falcons to feed their chicks and later identified by the Smithsonian, included a Robin, three Blue Jays, a woodpecker, a Bluebird, a Starling, and even an American Woodcock.

This was at least the fourth consecutive year these same peregrines had nested on the same ledge. It was however the first year in which any of the chicks were banded. The permission to enter the property and the cooperation in accessing the nesting ledge by Boston Properties management was appreciated by the banding team. Hopefully, future peregrine chicks hatched at this location can be accessed and banded as well. It seems to be a win-win arrangement for everyone involved.

During the weeks following the banding, the young chicks grew, developed flight feathers, and in early June, fledged and flew off into the world. However, one or more of the adult or juvenile peregrines may remain in the Reston area during the summer. Keep your eye on the sky; maybe you’ll see one. See previous coverage of peregrine falcons in Reston here:

Donald Sweig, an occasional contributor to the Connection, is a local birder, nature photographer, and former assistant raptor bander.