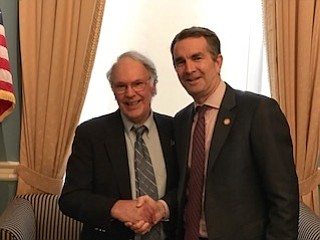 John Horejsi, Social Action Linking Together (SALT) Coordinator, and Delegate Patrick Hope were invited and were present last Monday as Governor Northam signed into law HB 50, the SALT Anti-School Lunch Shaming Bill that passed the House and Senate unanimously. The signing took place in the Governor's Capitol Conference Room on the Third Floor of the Capitol. SALT appreciates the support of all the advocates and of all the Legislators that put aside party affiliations and put all the kids in Virginia first, especially the most vulnerable. In recent years, parents and families have become increasingly concerned with "lunch shaming," or how schools penalize children for their unpaid lunch debt. This spring, the issue reached the General Assembly of Virginia, which passed HB 50 that the governor signed prohibiting school penalization of students with lunch debt. The bill also requires that notification of lunch debt be communicated directly to parents or guardians, not to the students.