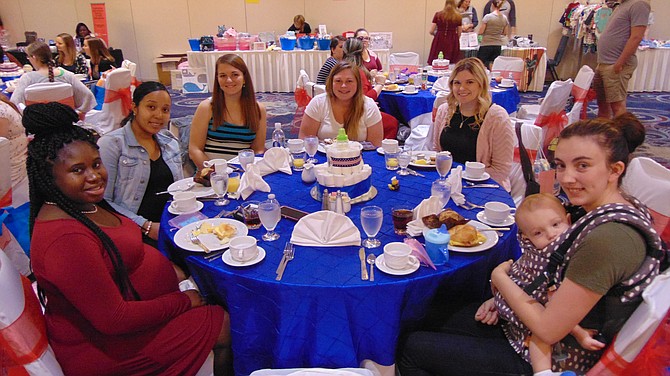 Some of the 50 women participating in the Baby Shower sponsored by Operation Homefront at the Springfield Hilton. Photo by Steve Hibbard. 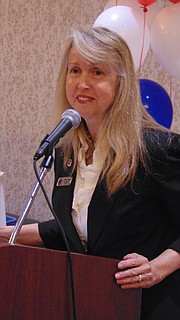 Some of the big prizes included an Exer Saucer. 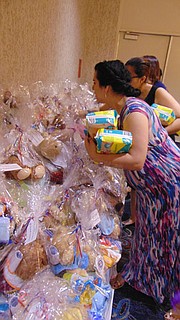 Valerie Snyder of Fort Meade selects from the gift baskets provided by Lockheed Martin during the Baby Shower for military families sponsored by Operation Homefront.

Some 50 military moms received some great baby gifts at the Star-Spangled Babies Shower sponsored by Operation Homefront on Saturday, June 16, at the Springfield Hilton. Seated in tables of 10, the moms-to-be and new moms were military spouses (Junior ranks of E1-E6) from all branches of the U.S. Armed Forces who came from Quantico, Fort Belvoir and Andrews Air Force Base.

After being treated to a catered breakfast with fruit, muffins, juices and coffee, there were raffles for big-ticket items, games, and prizes. The moms were given play money and could shop for nine items; the room was styled like a boutique filled with gift baskets, baby clothes, layette sets, and diapers. Each person was surprised with a car seat. There was also an educational component – moms could learn about lactation support, baby CPR, child safety and care for their baby.

“Operation Homefront works very hard to build strong, stable and secure military families, and one of the challenges for military families is in the frequency that they relocate – they’re leaving behind their family, their friends and their network. So, when they find that they’re going to have a baby, what more do you want than people to share it with,” said Vivian Dietrich, Senior Director for Operation Homefront, which was founded in 2002.

New mom Olivia Tousignaut of Frederick, Md., who gave birth to son Ian 13 weeks ago, said: “Events like these are great for new moms – especially to meet other moms in the military community when you’re moving a lot. It’s a great way to bond and have the whole mom experience together and really benefit from it because there are a lot of things you don’t get because they are expensive. But they’re so helpful in the early mom stage and then when the babies get older, so these events are wonderful for bonding and knowing you have friends.” She is stationed at Fort Belvoir with her military police officer husband.

Added new mom Alice Silver of Brigantine, N.J., who gave birth 10 weeks ago to daughter Emma: “I think this event is great; I think it’s wonderful for military families that don’t have family close to have a baby shower and someone to support them when they’re a new mom. I just think it’s a wonderful event put on by Operation Homefront.” Her husband is in the U.S. Coast Guard in Alexandria.