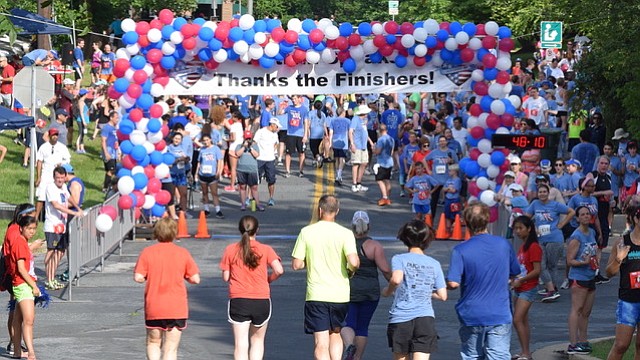 “It’s a way to help rally the greater community around this important cause and give back to a community that’s given so much to us.” — Steve Kirstein 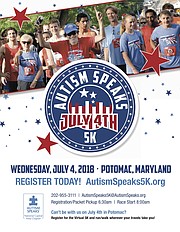 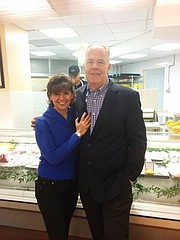 The tsunami of autism is not disappearing — it is only getting worse. A new statistic has just been released by the Centers for Disease Control and Prevention (CDC): In its biennial update on the prevalence of autism among the nation’s children, one in every 59 children has a diagnosis identifying him or her on the autism spectrum disorder by age 8. The numbers have increased by 15 percent in just two years and 150 percent since the first Potomac Autism Speaks Race was launched in 2000. Several years ago, the statistics cited 1 in 68 with an autism spectrum diagnosis and previously it was 1 in 88.

Potomac residents can support the battle against autism in many ways. Shop at the Market at River Falls on July 1 and 20 percent will go to Autism Speaks. Sign up to run or walk in the Autism Speaks 5K Run/Walk or run virtually from any location on July 4. Initiate or join a team and support it by participating or donating or make a donation to Autism Speaks.

Potomac will host the 18th annual Autism Speaks 5K Race and Fun Walk on the morning of Wednesday, July 4 at 8 a.m. The Race/Walk begins and ends at the Potomac Library and will draw more than 1,500 racers, walkers and families committed to the cause.

Potomac resident and Autism Speaks Developer of Field Events Susan Pereles says, “We have runners, walkers, families and teams that return year-after-year to take part in the event. Seventy percent have someone in the family or circle of friendship that is affected by autism.”

She founded the event in 2000 when she learned that her 2-year nephew had been diagnosed with autism. In her first effort, $100,000 was raised for Autism Speaks. The race will celebrate its 18th anniversary this July 4 — expecting to raise more than $250,000.

Three local business owners have consistently committed their resources in helping Autism Speaks. Yasmin Abadian and James McWhorter, owners of the Market at River Falls, have selected Autism Speaks as the recipient of their July 1 “Community First” day in which they donate 20 percent of their proceeds.

“We are a community business and we believe it is our duty to support those who support us,” McWhorter said. “Autism is becoming more prevalent. We have friends and regular market customers who have autistic children and we want to help all who are affected by it. Autism Speaks, and the 4th of July run are a Potomac institution and this will be our fourth year of gladly lending our support.”

Adam Greenberg, president of Restaurant Zone and owner of Potomac Pizza, donates tons of pizza for the after-race party.

“At Potomac Pizza, we have always lived by the philosophy that you need to support your neighbors and greater community,” he said. “When Susan Pereles initially called me, almost 19 years ago, to ask for our support, it was a very easy yes. I did tell her, it is the 4th of July and in Potomac, everyone goes away so I didn’t think many people would show up, but Potomac Pizza would be there. Boy was I wrong and happy to be so.”

Potomac resident Steve Kirstein serves on the board of directors for Autism Speaks and has led his team, “Richie’s Racers” since the founding of the event. Every year BOWA is a presenting sponsor and Richie’s Racers raises more than $20,000 through teamwork.

“This is BOWA’s 18th year of supporting this important event,” said Kirstein. “We became involved originally because my son Richard is on the autism spectrum, but it’s become so much more to all of us at BOWA. It’s a way to help rally the greater community around this important cause and give back to a community that’s given so much to us. The run starts at 8 a.m. on Chicago Street, Dewey Beach and the runners and walkers run around Silver Lake and back. My son was less than 2 when he was diagnosed. He was probably 8 when we started our remote race at the beach. It’s something not only my whole family, but many of our friends and neighbors look forward to as well. People come from Dewey, Bethany, Lewes and Ocean City. Richie is the official finish line-greeter and water bottle distributor. He also loves the team photo we take at the end. It wouldn’t be summer without this run. It’s very casual but much anticipated among the participants, many of whom have been doing this for 10 years or so.”

Each year, an estimated 50,000 teens with autism age out of school-based services. Since autism is a lifelong condition for most people, these young adults, their parents and their communities are faced with the permanent issues of employment, housing and social inclusion.

Autism Speaks is dedicated to promoting solutions across the spectrum and throughout the life-span for the needs of individuals with autism and their families. They do this through advocacy and support; increasing understanding and acceptance of autism spectrum disorder; and advancing research into causes and better interventions for autism spectrum disorder and related conditions.

Make Independence Day a special day by running or walking in the Autism Speaks 5K, cheering on the runners or celebrating them at the post-party. Race details are listed on the website: www.autismspeaks.org. The Wednesday, July 4 race begins at 8 a.m. with registration and packet pickup at 6:30 a.m. For more information, call 202-955-3111. New teams are always welcome.