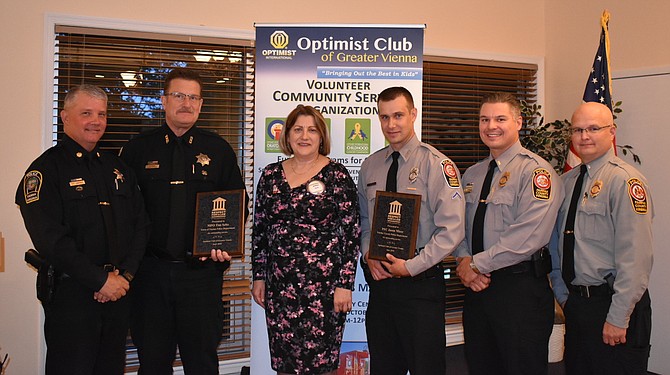 When Second Lieutenant Brian Gaydos called all his officers in for a mission briefing, one officer, PFC Jason Mizer, hesitated to leave his patrol. He was observing someone who he believed was acting suspiciously.

“Knowing my officer, I said, ‘You do your thing. I trust your abilities,’” Gaydos said. “So we cancelled the briefing and we went right into mission mode.”

Gaydos called additional assets and met Mizer on the scene. Gaydos said it turned out to be “a narcotics case that rolled into a large amount of stolen property.” He praised Mizer’s instinct that allowed him to know that something was wrong.

Wednesday, Mizer was one of two police officers given the Charles A. Robinson Jr. Respect for Law Award by the Optimist Club of Greater Vienna. The Optimists of Vienna have been giving this award annually for more than 20 years to one Fairfax County police officer and one Vienna officer that have been nominated by their commanders for doing outstanding work. This year’s award recipients were PFC Jason Mizer from the Fairfax County Police Department Fair Oaks District and MPO Tim Seitz from the Vienna Police Department.

“Tim was one of the best that we’ve had,” Deputy Chief Dan Janickey said, addressing the Optimists as he presented the award.

Seitz is a 30-year member of the Vienna Police Department; he has been serving since 1988. He spent most of his career in the patrol section, but also worked in the traffic safety program. Seitz has been a firearm instructor, a taser instructor, a certified patrol rifleman, a Rape Aggression Defense instructor and a field training officer. Janickey described him as having a “huge commitment to community.”

Mizer was nominated for the award for trusting his instinct in the narcotics case.

“Jason just has that thing… it’s that instinct that a lot of good cops have,” Gaydos said, speaking in front of the Optimists. “Ninety-nine out of 100 times, his instinct is dead on.”

Prior to the handing out of awards, the police officers joined the Optimists for dinner and discussion.

“It was nice to see the officers in a casual kind of social situation and to hear some of their stories,” Optimist Club Vice President of Community Anna Ryjik said. “We know they go through a lot to protect us.”