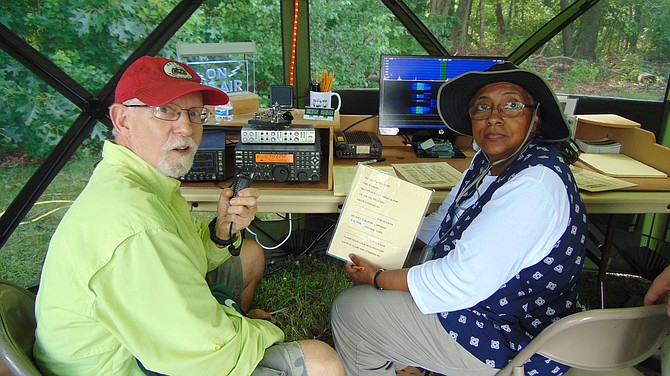 Gary Mannering of Falls Church (KJ4PZP) and Rebecca Cody of Herndon (KM4RDS) at the Get on the Air Tent. Photo by Steve Hibbard. 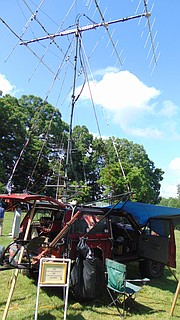 Mike Aimone of Fairfax installs a ground conductor on a portable generator. 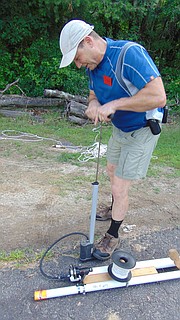 Mike Dannhardt pumps air into a pneumatic antenna launcher to launch a dipole antenna into a tree branch.

About 50 people took part in a Field Day sponsored by the Vienna Wireless Society, an amateur radio organization, at Burke Lake Park on Saturday, June 23, 2018. Field Day is a 24-hour national amateur radio event where members get points by making contacts with other operators around North America, including the U.S., Canada, Mexico, and Puerto Rico – either by radio, Morse code or digitally. The operations must be powered by emergency power sources using generators, solar power or batteries; no commercial power is permitted.

In the nationwide competition, they receive points for making contact with participants all over the country via voice modes (speaking through a microphone or digital – one point), for Morse code (two points), for having children or visitors participate, and even for using emergency power. The event included a community picnic and some people spent the night in tents. At the end, all of the points are tallied to rank the winners.

FIELD DAY is a 24-hour emergency preparedness communication exercise by amateur radio operators, with 4,000 clubs across the country participating, according to Pete Hadley, Director of the Vienna Wireless Society. Using spider beam antennas that send out signals in all directions, the members operate on four different frequencies in tents that do phone and Morse code communications.

“What’s interesting is right here in the middle of the woods, we are able to talk to anybody around the world,” said Hadley. “In the ‘Get on the Air Tent,’ the whole point of this operation is to encourage people who have never been on the air or who have not been on the air recently to come back and see how much fun it is to talk to people worldwide.”

According to Mike Dannhardt, Field Day Coordinator, each of the five tents or operating positions have different operating stations using voice, digital or Morse code. Depending on the antenna length, they have different wavelengths or frequencies that determine how far they can communicate.

“It’s a great STEM activity for children to come out and learn about antennas and electronics and computers. There’s all facets of it. We have some solar activity going, we have satellite communications going; there’s a lot of different aspects to it and it’s great for children,” said Dannhardt.

“The Amateur Radio Contest is a lot of fun; it is technically challenging. You get to use engineering skills for building the station, selecting the components, making all the cables up, troubleshooting it, and in my case, a lot of design and fabrication and welding. So, a lot of mechanical engineering skills go into it as well to do a mobile rig like this,” said John Young of McLean from his mobile ham radio station built out of his jeep. He has won two national first-place wins in the FM Category.

“When I talk about Field Day, I tell people our goal is to come out, learn some things, try some new things, have a great shared experience and make some points, in that order. So, I would much rather have a new person sit down and learn something than sit there and grind out 50 points myself,” said Doug Reece, Director of the Vienna Wireless Society.