All Aboard at Cabin John Regional Park
Votes

All Aboard at Cabin John Regional Park 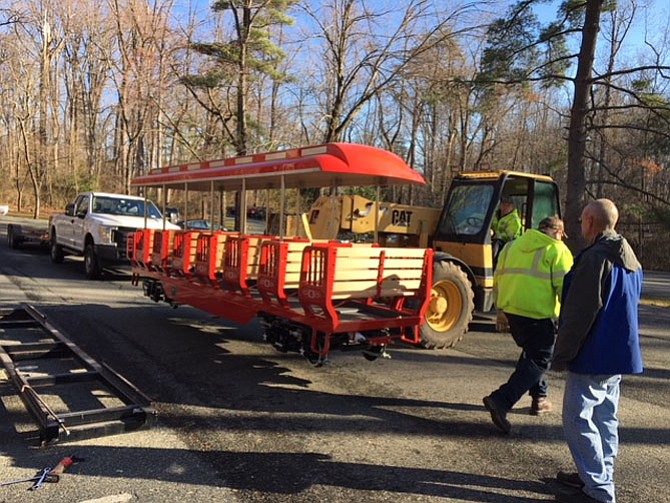 A new train car is loaded onto the track.

Residents will have a chance to try out the new train cars at Cabin John Regional Park in just a few weeks. The trains will be running daily during the Montgomery County Public School Spring Break — March 26-30.

Five brand new coach cars arrived at the park Feb. 27, according to Tyler Swavely, facilities manager for trains at Cabin John and Wheaton Regional Park. He also oversees the Carousel at Wheaton Park.

“The newer cars are wider [than the old],” he said. “Each bench can hold three people comfortably.”

That means that at capacity 64 riders can take the train around the two-mile track. Each ride takes between 12 and 15 minutes, Swavely said.

The tracks themselves are still in good condition, he said. They were laid in the 1960s, before the 1964 opening of the Cabin John Miniature Train in 1964.

Until this winter, the passenger coaches were original too — 54 years old.

“They were looking very old,” Swavely said. “We were having issues with the wheels wearing down. The new cars will have a better grip.”

The new cars were made in Wichita, Kansas by Chance Rides and arrived at Cabin John Regional Park on a flatbed truck.

Getting them off the truck and onto the tracks was interesting to watch, Swavely said.

They used a tractor with forklift, lifted them from the truck to the ground and then used the same tractor to lift them onto the track, he said.

Swavely said the old cars were picked up by a man from Texas.

“They will be used in the Austin Zoo,” he said.

There will be a Grand Opening and ribbon cutting for the new train on National Train Day, May 12, at 10 a.m. at the Cabin John Train Station.

Meanwhile the cars will be rolling down the tracks for Spring Break week and weekends in April.

“We put cut outs [of caterpillars, rabbits, birds … spring-themed animals] along the tracks and each rider gets a check off card for marking off each cut out they find,” he said.

Trains will run from 10 a.m. to 6 p.m. March 24-April 2 and weekends in April. Tickets are $4 per person, children under 2 ride free with a paying adult. Tickets can be purchased online at ActiveMONTGOMER.org or on site, according to montgomeryparks.org.