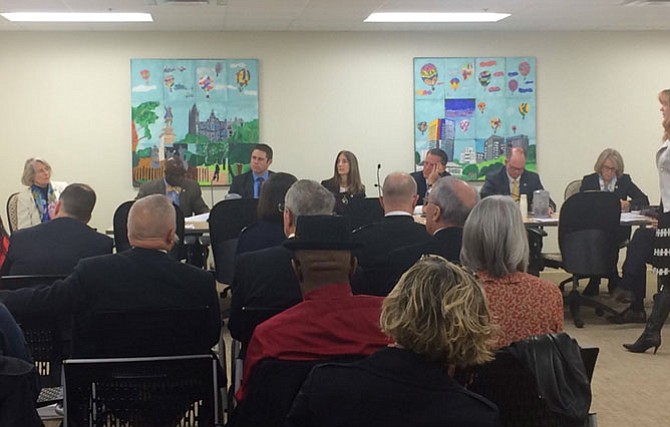 Del. Eileen Filler-Corn co-hosted her annual joint meeting of the Arts Caucus and the Military and Veterans Caucus this session. Photo contributed

Since co-founding the General Assembly Arts Caucus, Del. Eileen Filler-Corn (D-41) has made it her commitment to celebrate the arts and make arts education more accessible throughout the Commonwealth. For more than seven years now, Del. Filler-Corn has hosted two caucus meetings per year; one as an independent caucus, and another as a joint caucus. This past year, the independent caucus meeting focused on the arts in secondary and higher education.

“The arts enrich the lives of Virginians in countless ways. Beyond just providing entertainment, the arts create jobs, attract a stronger, more skilled and creative workforce, generate needed tax revenues, and adds so much to the overall cultural and economic vitality of our region,” said Filler-Corn. “More often than not, people lose sight of the contributions of the arts to the Commonwealth, and this caucus seeks to celebrate the arts and the potential they bring to Virginia.”

Del. Filler-Corn also co-hosted her annual joint meeting of the Arts Caucus and the Military and Veterans Caucus this session. This annual tradition provides the opportunity to discuss organizations that use the arts as a way to positively impact the military and veteran communities in Virginia.

This year, Rick Davis, Niyati Dhokai, and Eileen Kennedy spoke on behalf of the Veterans and the Arts Initiative at George Mason University, which serves as an arts and community hub for local veterans, service members, their families, and community members. Davis, Dhokai, and Kennedy described how the Initiative brings the community together at the Hylton Performing Arts Center in Prince William County to engage veterans and military families through performances, workshops, lessons, exhibitions, and special events that feature music, visual art, dance, and poetry.

“I appreciated representatives from GMU coming down to Richmond to share how they help the brave men and women who serve our country,” said Filler-Corn. “I look forward to continuing to work with them and the many other great arts organizations both during my time in Richmond as well as back in Northern Virginia.”