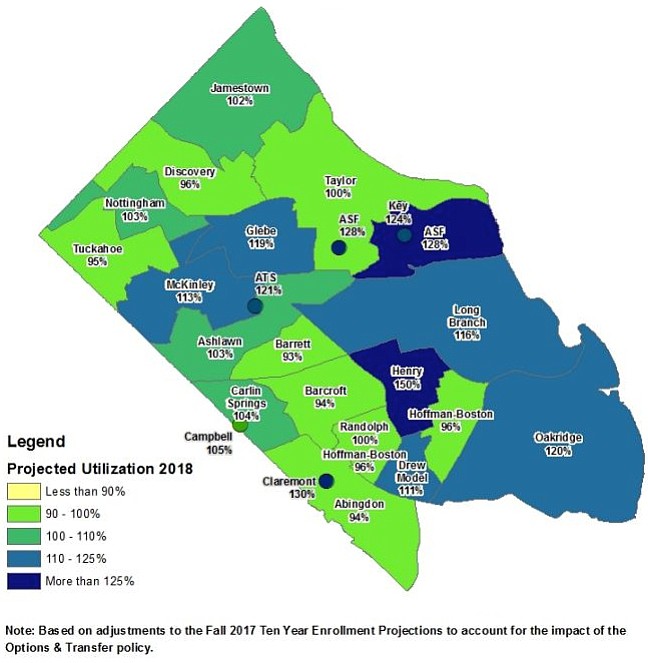 Like many Northern Virginia jurisdictions, Arlington County Schools are perpetually overcrowded. An update in the enrollment trends for the FY 2019 shows Arlington has already hit 27,000 students; the highest population for the schools ever. As Arlington Public Schools continues to try to catch up to the demand with new schools and extensions, the interim solution has increasingly become relocatable trailers that act as temporary classrooms.

One of the proposals in the upcoming 2019-2029 Capital Improvement Plan (CIP) is to add a new kindergarten classes in relocatable trailers at the Arlington Traditional School (ATS) and Campbell Elementary. There are currently four kindergarten classes at ATS and three at Campbell. According to school documents, there are currently only four relocatable classrooms at ATS while the school is capable of supporting 12, and only two relocatables at Campbell while the school is capable of supporting eight. With new relocatables, ATS and Campbell students will add to the 993 students served in Arlington schools with relocatables.

But at the School Board meeting on March 8, parents from ATS rallied to ask the School Board not to add a new class and new relocatables to an already overcrowded school. Projected capacity utilization for the 2018 school year showed ATS at 116 percent utilization, the fifth most crowded elementary school in the system. ATS has made do, with a board report stating that earlier surveys found the school was effectively using its space, but parents expressed concerns that new classes and new trailers could break the school’s precarious balance.

“I have serious concerns that this temporary fix could become a permanent one,” said Lisa Donohue, who has two sons at ATS. “ATS will become the most crowded school in the county by 2021. It makes more sense to wait before increasing ATS enrollment until after [redistricting and new schools open]. We have some of the largest class sizes, with 24 students per class. That’s increased 18 percent in the last five years, [putting us] in the top five most overcrowded schools.”

Like Donohue, ATS parent Hallie Zimmers asked for the schools to wait for further study and for other capacity increasing projects to come online across APS before assessing whether or not to add relocatables to ATS.

“I love ATS for its outstanding academics and diverse student body,” said Zimmers. “I’m very concerned about the prospect of adding another kindergarten class at ATS as well as possibility of the school being relocated. When kids started ATS 3 years ago, there were three kindergarten classes. Two years ago they added a fourth. Now, there’s potential for fifth. This only means more trailers … One year in trailer is adventure, more is unacceptable in a county with blue ribbon schools.”

Other parents stressed that the concerns about increasing the enrollment at ATS wasn’t another “not in my backyard” type of argument.

“We love our program and we would love if the program was for all Arlington kids,” said Lisa Moneymaker. “We want to stress that it’s not that we don’t want to take on more kids, but that our facility cannot accommodate it. Our facilities are at the breaking point.”

After the public discussion, School Board member Monique O’Grady asked school staff whether the new relocatables would be part of a permanent population increase at ATS or whether the move was temporary. Staff answered that each of the option schools would be asked to take on additional burden, and each year projections across the county would be reassessed and populations adjusted.

“We have a lot of students that will be in relocatables,” said School Board Chair Barbara Kanninen. “We’ll be struggling with this, but I’m optimistic about the future as we bring these elementary schools online. We’ll catch up and build some new optimal learning environments.”