Kids Trout Fishing Derby Reels in the Fun in Herndon 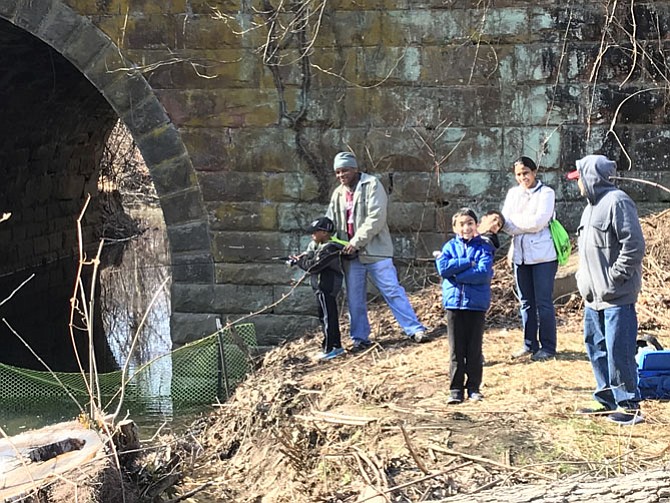 Narendra DaSari and his wife Krishna along with their son Sachin Marshall, 7, and his friend Harshul Chimpalli, cast their lines hoping for the big one at the Herndon Annual Kids Trout Fishing Derby. Andria Sias and his son, Cameron, 6 also try their luck. Photo by Mercia Hobson. 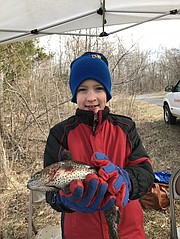 Alex Raye, 7, of Reston, hauled in the first catch of the day at the Herndon Annual Kids Trout Fishing Derby 2018. 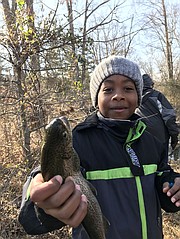 Jaeden Cummings, 9, holds up one of three trout he caught within the first hour of the Herndon Annual Kids Trout Fishing Derby 2018. "We're going to take them home for Grandma to cook. I think she'll curry them," he said excitedly.

At some time in their early years, nearly every boy and girl wants to go fishing and experience the challenge of man-versus-nature, the thrill of a hoped-for catch tugging at their fishing line and then reeling it in. To give young anglers a bit of an edge in the Town of Herndon Annual Kids Trout Fishing Derby held March 10, from 8 a.m.-noon, John Dudzinsky, Community Forester, Town of Herndon, confirmed that earlier in the week a section of Sugarland Run located behind the Herndon Police Station had been heavily stocked with trout bought from a private trout farm with a donation from the Herndon Fraternal Order of Police.

Video of the release showed trout flashing silvery pink, arching, and flipping as town staff transferred them from 5-gallon buckets into the stream; and these weren't itty-bitty fish either but big ones, some over a foot in length.

FAMILIES AND FRIENDS began arriving shortly after 7:30 that morning ready to have some fun and spend quality time together. Many seasoned young trout masters carried their rods, reels, and tackle boxes as they headed down the paved path to the check-in tent and stream. For youngsters who did not own fishing gear, loaner fishing poles and free bait were available.

Children and youth could fish without a license, teens and adults ages 16 & up had to have a valid Virginia State Fishing License. Adults were not permitted to fish during the kids fishing time although they could help.

Town staff and volunteers from Trout Unlimited, a nonprofit organization dedicated to conserving, protecting and restoring Northern Virginia's cold water fisheries and who "like to have a lot of fun” were on hand to share their knowledge on fish habits and the stream's characteristics. They demonstrated how to bait, cast, and hook the trout and provided hints to novice fishers. Trout Unlimited volunteers stood ready to clean and bag the fish having it all ready for cooking. "What a great way for families to connect or reconnect," said Bill Errico, Trout Unlimited. "They're working together and having fun."

Down at the shallow stream, young anglers appeared to have little difficulty nearing the daily bag limit of four fish within the first couple of hours. "I got one, I got one,” echoed along the bank.

Herndon Police Officer Hank M. Ruffin helped his young friend Jaeden Cummings, 9, there with his dad, Brian, who works for the Town of Herndon.

"We're going to help you get one more, and then you've got your limit," Ruffin said to Jaeden.

"I've never gone fishing before,” Jaeden said as he held up his catch bag. "They're heavy. We're going to take these home for Grandma to cook. I think she'll curry them; she's from Trinidad. She's a good cook."

CHILDREN who wore sunglasses that not only protected their eyes from the hooks are involved in the sport, but they had a Superman advantage. The polarized lenses cut through the glare on water's surface and enabled the angles to see under the water and position their trailing bait near trout hiding in the dark shadows of overhanging tree limbs and deeper pools.

Alex Raye, 7, of Reston brought the first fish back to the check-in tent; It measured over a foot in length. Raye excitedly explained how he caught it. "I was at the end of the bridge. It (my line) got very shaky, like a fountain. He was very heavy, maybe like five pounds. We're going to have him cleaned, and my Grandma is going to cook him, my trophy fish."

“This is a great community event for kids, both those with fishing experience and those who have never handled a rod and reel before. Multiple departments deserve kudos for helping to create the event’s synergy including Police, Community Development, Public Works, and Parks & Recreation,” wrote Cindy Roeder in a statement for the event.

“The volunteers from Virginia’s Trout Unlimited provide outstanding support for the event, especially in cleaning the fish so that patrons can take them home to cook and enjoy.”

With a about 90 children fishing that day, most of the trout released into Sugarland Run will be fished out. Various other local stocked fishing opportunities are scheduled and open to children in the Northern Virginia region during the next couple of weeks, among them fishing derbies and rodeos in Reston, Vienna, and Fairfax City.