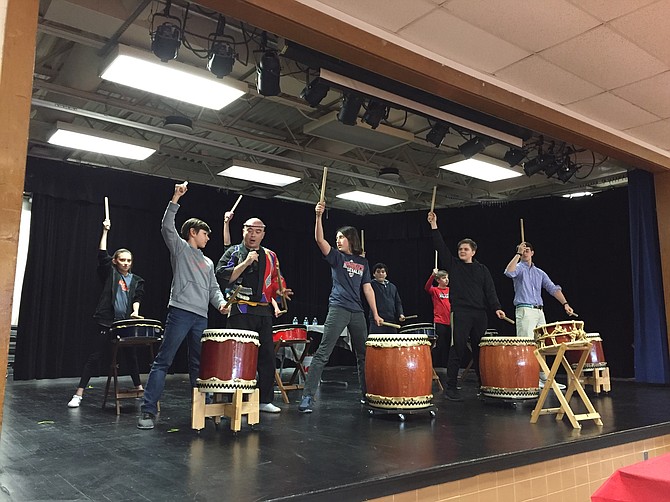 Students are loving the experience of hands-on activities such as Japanese drumming, with a professional serving as their guide. Photo contributed

By Sebastian Herbolsheimer and Aisha Shakeel

From left: Caroline Senich, Keelin Byrne, Katherine Senich, Megan Borsos, and Amelia Rewis had fun at World Heritage Night where they got to try new foods, hang out with friends, and learn more about other people’s cultures.

Performances from dancers entertain the Cooper community as members of the audience join the dancers on stage.

“A people without the knowledge of their past history, origin and culture is like a tree without roots,” stated Marcus Garvey, a prominent African American political leader and nationalist from the early 20th century. Seventh and eighth grade students at Cooper Middle School celebrated the world’s cultural diversity and ethnic differences through a symbolic event on March 15. The event took place in Cooper’s gyms and cafeteria from 6-7:30 that evening. Students and parents enjoyed a memorable night of food, festivities, and fun.

“I would rate it [World Heritage Night] a 13 out of 10,” says Alex Karloutsos, a student at Cooper Middle School. Families shared traditions through a potluck with ethnic dishes, and cultural performances.

“My favorite part was seeing all the different cultures and food,” said seventh grader Zoya Qadiri. Additionally, they admired displays, participated in workshops, and viewed festive booths. By the end of the event, students and families went home with more cultural knowledge and experience than they had hours before.