“Therefore, as my last motion as the Mount Vernon planning commissioner, I am prepared to agree with the staff’s recommendation.” —Earl Flanagan 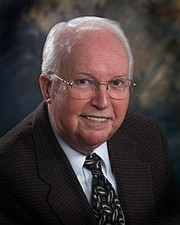 “I wasn’t planning on doing this tonight when I came here, but I just thought about it,” said Viani. “I just want to take a minute here to acknowledge a lifetime of service that I think has really made us a better world, a better country, a better county, and a better community.”

Flanagan has been the Mount Vernon planning commissioner since he was appointed by then District Supervisor Gerry Hyland in December 2006.

Instead of three-minutes of public testimony on Shon and Crystal Moore’s application for a screened-in porch in Lorton, Viani, land use attorney, used the allotted time during the public hearing to speak about Flanagan instead.

“I just want to take a minute here to kind of acknowledge what is happening tonight,” he said.

“I could embarrass Earl with some of the stories about growing up in Chicago and beginning as a childhood star on radio, but instead I’ll focus more on the beginning of his public service as a sergeant with the 71st Infantry Division, as part of Patton's Third Army in the Second World War,” said Viani.

He described Flanagan’s duties in the war. “Earl operated in that capacity all the way through Northern France, the Battle of Bulge, crossing the Rhine, into Germany, and eventually into Austria. And in the process of those bloody final weeks of the war, he was involved in the liberation of a concentration camp. I’m sure you all know this story, but I think it has to be publicly acknowledged.

“Following the war, Earl had his private practice and then served in the department of HUD as a federal employee dealing with architecture,” said Viani. “More locally, he served, obviously, on the Planning Commission. Even more locally, in the Mount Vernon District, a well established history, both on the Mount Vernon Council and the Southeast Fairfax Development Corporation and a million other local organizations.

“He even was our ‘Person of the Year’ back in 2000,” said Viani. The Board of Supervisors voted him the Mount Vernon District’s Lord Fairfax in 1999.

“Earl, but for your efforts we live in a much better world,” he said. “Thank you very much for your lifetime of service.”

Flanagan received a round of applause from all his colleagues on the commission.

“We appreciate those comments,” said Chairman Peter Murphy. “As you know, we will be embarrassing Earl further at a Planning Commission Awards Banquet in April. And, also, he is going to be honored by the Federation of Citizens Associations, the news has just been released, for his service to the country, the Commonwealth and the county. Those three “C’s” are very important in Earl’s life, and we’re all looking forward to both those banquets,” said Murphy.

MURPHY then addressed Lorton resident Shon Moore, the applicant requesting the screened in porch. “Mr. Moore, is there anything you'd like to rebut from what you’ve heard?”

“With that, Mr. Chairman, I note that there was no opposition testimony,” said Flanagan.

Flanagan continued: “... but wish to report for the record that the South County Federation does not oppose this application based on the Lorton Station homeowners approval of this application. Therefore, as my last motion as the Mount Vernon planning commissioner, I am prepared to agree with the staff’s recommendation and I move that the PC approve FDPA-1996-MV-037-06.”