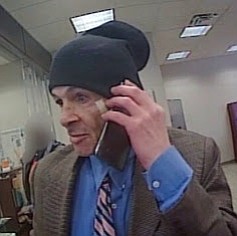 A man entered the SunTrust bank at 5922 Richmond Highway on March 23 at 12:28 p.m., displayed a note to the teller, implied he had a gun and demanded money. The man was given an undisclosed amount of cash and left the bank. There were no injuries. The suspect was described as a white male, 40-50 years old, wearing a black stocking hat, a tan jacket, and a blue shirt with a striped tie. He also had a band-aid on the right side of his face.