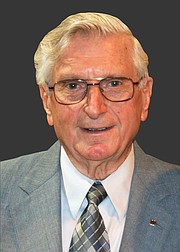 James R. Harris, of Alexandria, died peacefully on March 4, 2018, surrounded by family. He was 84 years old.

After his discharge from the USCG, Mr. Harris trained to become an electrician, working in the Alexandria area. In 1969, he opened his own firm, James R. Harris, Inc., a mechanical and electrical contractor, on Duke Street in Alexandria. For the next 30 years, he remained at the helm of his company working primarily in the Old Town Alexandria area.

Mr. Harris was a long-time member of the Rotary Club of Alexandria and was also a Fourth Degree in the Knights of Columbus. He often spent hours of his free time helping others, and delighted spending time in Wrightsville Beach, N.C., each summer. Perhaps his greatest joy though was when he was in the company of his loving wife, three adult children and their families, including five grandchildren.

A funeral service and celebration of his life will be held on Friday, April 6, 2018, at 10:30 a.m. at Good Shepherd Catholic Church in Alexandria.

In lieu of flowers, contributions can be made in his name to the Rotary Club of Alexandria.