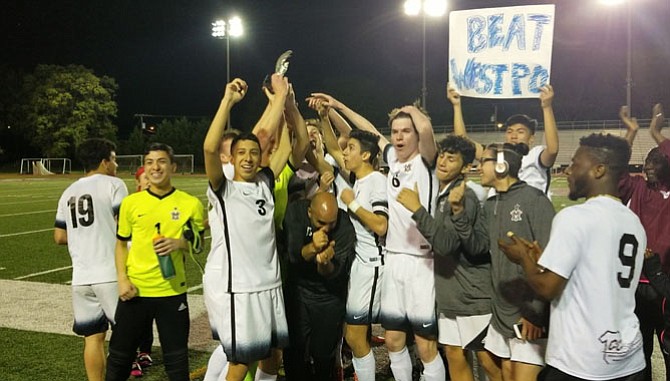 A soaking wet Tony Garza stood on the soccer field at Mount Vernon High School on Tuesday night and said he’s not big on hyping the “Route 1” rivalry. However, the Mount Vernon boys’ soccer coach isn’t naïve to the impact a victory over West Potomac would have on his Majors.

After all, entering Tuesday’s match, Mount Vernon hadn’t beaten the Wolverines since 2013.

When the referee blew the final whistle, the Majors made it clear just how much joy they experienced in beating their rival.

Ian LaVallee scored in the 39th minute, Jorge Moreno netted an insurance goal in the second half and Mount Vernon defeated West Potomac 2-0 in a Gunston District match on May 1. After the game, Mount Vernon players doused Garza with a celebratory water bucket bath before turning their attention to the Gunston Eagle trophy, which is awarded to the annual winner of the rivalry match.

“It’s exuberant just to have [the trophy] back,” Garza said. “I don’t do the whole ‘Battle of Route 1’ thing, it’s just the morale [and] the thrill of victory for these boys because they really need it.”

The victory improved Mount Vernon’s record to 5-4-2, including 4-0-2 in the district, and gave the Majors three wins in their last four matches. It also gave Mount Vernon its first win over West Potomac since 2013 — the year the Majors won the state championship.

Prior to Tuesday, none of the current Majors were in high school the last time Mount Vernon beat West Potomac.

“I have never won [the Gunston Eagle], I’ve never beaten West Po, either — even on JV,” LaVallee said. “It’s a big win for me.”

LaVallee gave the Majors a 1-0 lead right before halftime when he came up the left side of the field, made a move and used his left foot to beat the West Potomac keeper to the back post.

“I just knew I had him on the cut to the inside on my left,” LaVallee said, “and then I just drove through to the back post and it went in.”

Moreno increased the Majors’ lead to 2-0 with a goal in the 53rd minute.

While the Majors found the net twice, Mount Vernon keeper Victor Reyes did his best to keep West Potomac off the scoreboard. The senior finished with 17 saves and blanked the Wolverines.

“Since it’s my senior year, I wanted to go all out,” Reyes said. “I tried my best to keep a clean sheet.”

Reyes’ performance did not go unnoticed.

“Victor’s phenomenal,” LaVallee said. “He saved us early, really. He had a few key saves there in the beginning [that] really kept us in the game. That was pretty much the difference in the beginning because without him we go down one or two there early and we might have shut down a little bit — we have a tendency to do that. … It’s really great to have a keeper like him on the team.”

Mount Vernon will travel to face Annandale at 7:15 p.m. on Thursday, May 3 and will wrap up the regular season with a road match against T.C. Williams at 4:30 p.m. on Tuesday, May 8.