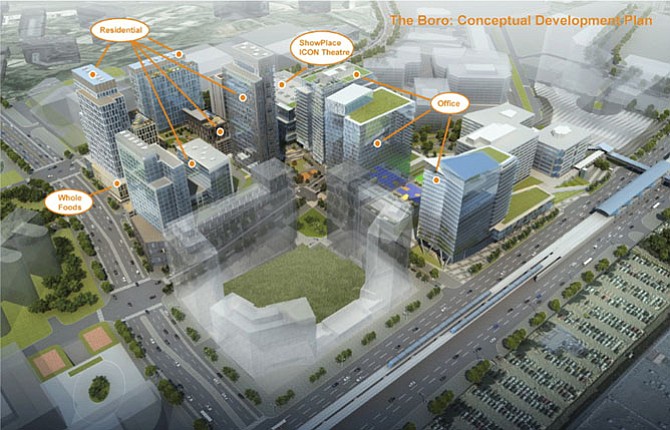 Artist’s rendering of the scope of The Boro, a major addition to the new Tysons. Rendering courtesy of Fairfax County 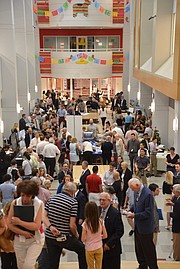 The Tysons Partnership and Fairfax County hosted an Open House on May 3 to offer the public an update on the growing city, allow attendees to speak with county officials and representatives from the developments, and to sample some of the offerings from food and beverage vendors operating in the district. 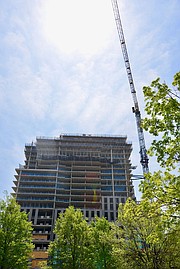 A component of The Boro, an ambitious neighborhood in Tysons that will include 14 new mixed-use buildings, a theater, a public library, the region’s largest Whole Foods, retail and dining, and multiple parks and green space, rises into the Tysons skyline.

The Highgate apartments on Jones Branch Drive are ready for residents and already at almost 70 percent occupancy, according to Lead Resident Services Coordinator Mark Monroe. Directly across from the Hilton hotel, the apartments back onto park facilities and pathways.

Blink and you might just miss the next major addition to the ever-changing Tysons skyline. After years of construction on Metro’s Silver Line and the four stations serving the Tysons area, it seems like work on the Tysons Comprehensive Plan, adopted by the Fairfax County Board of Supervisors in 2010, is moving at light speed, versus rail.

“The pace of change in Tysons is astounding,” said Sol Glasner President and CEO of the Tysons Partnership, the large nonprofit collaboration of Tysons stakeholders whose mission is to “accelerate the transformation of Tysons.”

In just the last four years thirteen new buildings have already added to the Tysons growth spurt. At present, twelve more, representing an additional 3.9 million-square feet, have passed through planning and design and are under construction.

The few inhabitants of the Tysons Corner of the 1950s, which consisted mostly of a general store and Post Office at the intersection of the Leesburg Pike (Route 7) and Route 123, wouldn’t recognize the renamed Tysons of today. It’s possible that the current residents and commuting workers will have some difficulty recognizing their own neighborhood in just a few short years, let alone before Tysons reaches its projected 2050 completion date.

If developers and the County remain true to the vision of the Plan and the Tysons Urban Design Guidelines endorsed by the Supervisors in 2012, these changes may be truly welcomed. Learning from missteps in the past and extensive studies of the most successful development projects around the country, the design guidelines set out a robust list of goals including:

THE TYSONS PARTNERSHIP fully supports the guidelines. The Partnership and the County hosted an Open House at Basis Independent School in Tysons on May 3 to bring the public up-to-date on the status of the project, and to showcase some of the properties, services and food and beverage providers already calling Tysons home, or on the cusp of opening their doors.

“We are committed to making this a truly livable, walkable mini-city, where people want to put down roots. Where the services and amenities they need are on their doorstep and they can often leave their cars behind,” Glasner told the open house attendees.

Following Glasner, U.S. Rep. Gerry Connolly (D-11) took the microphone and told the audience that he is excited to watch Tysons becoming a “vibrant, 24/7 community.” Largely crediting today’s progress to what was often viewed as the risky, sometimes controversial and occasionally stalled, Silver Line extension to the Metro system, Connolly hailed the burgeoning urban center as a model for the future and an enormous economic boon to Northern Virginia.

Connolly noted that Tysons had just welcomed its tenth Fortune 500 tenant, and “that’s more than what 30 other states can claim.”

Citing the massive Capital One development on Route 123 just east of the Capital Beltway, Connolly said that the area could anticipate $1 billion in tax revenues, which would reduce the tax burden on homeowners in the region, while providing much-needed funds for improvements and services.

With corporate residents like Capital One, Hilton Worldwide, The MITRE Corporation, Northrop Grumman and others, Tysons is already the 12th largest business district in the country. All that’s missing for Tysons to truly claim the title of “City” is the lack of round-the-clock residents – those staying put after work, rather than all “commuting in or out at the same time each day,” as Connolly described the current state of affairs.

The County, the Partnership and the developers are working vigorously to remedy that.

But even in the midst of the most far-reaching projects within the 2,000+ acres that make up Tysons, the developers are adhering to the design plan, incorporating in their designs significant amounts of green space, athletic and recreational space and/or facilities, and in some cases, even room for arts and entertainment to be showcased or performed.

The Capital One complex, for example, while expanding to a 5.2 million-square-foot campus, will feature a 1.5 acre “skypark” – an elevated, open-area green space. The banking industry giant will also have a Wegman’s grocery store within their environs, as well as the 125,000-square foot Capital One Center which will offer conference facilities, along with a 1,500-seat performing arts venue. With residential towers and a hotel on site, it’s no wonder Connolly described the complex as being almost a mini-city in its own right.

The Boro, currently under construction adjacent to Route 7, Westpark and Greensboro Drives and within comfortable walking distance of the Greensboro Metro Station, is perhaps one of the most ambitious undertakings in the new Tysons. Developers The Meridian Group and Kettler are “working to build a neighborhood,” according to sales manager Chris Blakemore of the Mayhood Company.

Blakemore was at the Open House, displaying renderings and factsheets about “Verse,” the luxury condominiums that he described as almost a “virtual village” and that will form an integral part of The Boro. The Verse design pays homage to the “green space/walkable lifestyle” concept that has been the mantra of the Tysons Comprehensive Plan from its conception. Like Capital One, Verse will also feature a “skypark,” as well as town square-style common areas with fountains and a stage for live entertainment.

IN TOTAL, The Boro, which sits on the highest elevation in Tysons, will add fourteen new buildings. The site is so large it is dubbed a “superblock” by planners, but the developers are dividing up the project for accessibility by adding four new blocks with three new streets. The mixed-use project will place its three office towers closest to the Metro station. Five residential buildings will share the neighborhood with a hotel, retail and restaurant establishments, seven parks and a public library, which the developer will design and build.

The Boro is also pleased to have secured the largest Whole Foods grocers in the D.C. area at 70,000 square feet. A later phase of the project will add a 15 screen movie theater with reserved seats, a bistro and a full bar.

The southern end of The Boro will open up to Magnetic Park, the development’s central open space.

The plans being approved reflect a focus on the “live, work, and play” objectives of the County, but in their decision-making, county officials haven’t forgotten to address one of the major challenges faced by the region – the lack of affordable housing.

The developers building in Tysons have been charged with including a greater percentage of affordable and workforce housing than is required elsewhere. The Tysons Plan calls for such housing to be made available to residents making from 50 to 120 percent of the area median income, and recommends that the new, nonresidential developments contribute $3 per square foot to a housing trust fund toward that end. As Connolly pointed out in his remarks, “this whole thing only works if people can afford to live here where they work” regardless of their occupation.

Transportation, infrastructure and security in the “Next Great City” are also being given full consideration.

Lucas said that the Fairfax County Police Department had learned some “hard lessons” during the creation of the Mosaic District and the redevelopment in Merrifield. “We need to move from reaction to looking down the road to properly serve the residents of this area as it continues to grow.” To do just that, the Department brought in outside expertise to re-work their model and make projections on manpower needs.

“Even as Tysons exists today, this area accounts for 29 percent of our calls for the entire county.” The statistics indicate that by 2042 as many as 224 additional officers could be needed to meet the needs of the city-in-the-making.

As for transportation and infrastructure in the expanding urban center, aside from the new streets that the developers are adding to ensure connectivity and walkability, projects like the Jones Branch Connector, already 46 percent complete, have been included to improve circulation through the area. A multimodal span across the Beltway into Tysons, the Connector will enhance mobility for drivers, pedestrians, cyclists and transit riders alike.

THE SCOTTS RUN TRAIL, estimated to begin construction in late Spring of 2019, will provide pedestrians with a lighted connecting pathway from Magarity Road at Westgate Elementary to Colshire Meadow Drive near the McLean Metro station, with bridges over Scotts Run Stream and its tributary, while the Vesper Trail, slated for completion in October of this year, will provide a shared use path from Vesper Court to Route 7 and the Springhill Metro station. Multiple plans are being considered to best allow for accessing the Washington and Old Dominion Trail, the longest and most frequented multi-use path in the region. At the Open House, staff from both the County and the Virginia Departments of Transportation exhibited maps illustrating the transportation plans and proposals.

The Tysons Partnership website at www.tysonspartnership.org and the county’s website, keyword “Tysons” both offer a wealth of information about the plans, from history to current status and timelines for each private and public piece-of-the-puzzle project, and opportunities for public feedback as the project progresses.