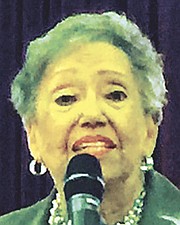 Ellen A. Graves died on Monday, April 9, 2018 at Reston Hospital Center in Reston. Her family is grateful for the friends, family and, caregivers who supported her through her brief illness.

Ellen was born to Lora Tyler Adkins and Alfred Adkins in Charles City, Va. As a teenager, she moved with family to Atlantic City, N.J., where she met and married her husband, William R. Graves. Together, the pair raised two daughters, Lora and Debra, in Philadelphia, Pa. There she enjoyed a vibrant family life, while working at the family-owned Bus Stop Record Shop at 60th and Market Street. Ellen began working in Human Resources at IBM; her tenure with that corporation took her from Philadelphia to New York and eventually back to Virginia before retiring after more than two decades of service.

In “retirement,” Ellen dedicated herself to national and local community. Drawing on the skills she had developed at IBM, she led The National Association of Negro Business and Professional Women’s Clubs, Incorporated (NANPW), an organization dedicated to supporting African American women in the business sector, as Executive Director. She worked as Chief of Staff for Fairfax County Supervisor Cathy Hudgins.

During Ellen’s years in Reston she worked tirelessly to make her community a more inclusive, welcoming and supportive place. In 2013, she was elected to the Reston Association Board of Directors and, she concluded her service in 2017 with a two-year term as President of the Board. Ellen also served on the boards of the Fairfax County Social Services Board, Friendly Instant Sympathetic Help (FISH), Reston Historic Trust and Museum, Reston Interfaith, Private Industry Council, the Southgate Community Advisory Board, and United Christian Parish.

She was instrumental in founding the Reston Multicultural Festival, an annual event held at Lake Anne Plaza, which celebrates the culture of Restonians from all races, ethnicities, and nationalities. Her strong, unflagging leadership and willingness to help all garnered her awards including: the Best of Reston (2004) and the Lady Fairfax Award (2011). All of those who worked with her will agree that her warm smile, engaging laugh, and tremendous spirit she brought to all of these activities will be missed.

In lieu of flowers memorial donations may be made to SouthGate Community Center Fund. www.southgatecommunitycenter.org/friendsofsouthgate 12125 Pinecrest Road Reston, VA 20191