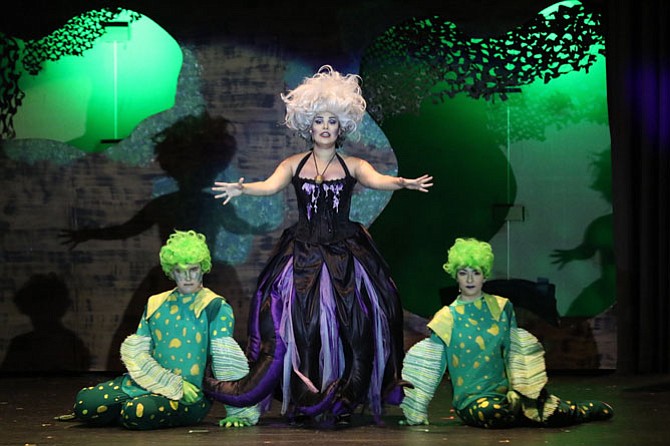 With book by Doug Wright, music by Alan Menken and lyrics by Howard Ashman and Glenn Slater, The Little Mermaid opened on Broadway in January of 2008, running for 685 performances. The musical is based off of the 1989 beloved childhood animated film of the same name and the famous fairy tale by Hans Christian Anderson and includes all the classic songs like, "Kiss the Girl" and "Under the Sea".

Kamila Adamczyk brought beauty and innocence to the role of Ariel. She lured the audience to be a part of her world and her journey to find true love with a voice as clear and sparkling as water. Eli Nygaard as Eric perfectly complimented Adamczyk with his graceful charm and harmonies as sweet as caramel. He exuded elegant manliness and charisma in numbers like "Her Voice" and "One Step Closer".

Julie Kovach was magnificently menacing as the sea witch Ursula. Kovach convincingly cast a spell over the audience with her verbose vocals, imposing movements and impeccable acting. The crowd's favorite crustacean, Sebastian, was delightfully portrayed by Densmore Bartly Jr. While saddled with the most difficult prop, Bartly's accent, presence, energy and comedic skills never faltered.

The vocals by the entire cast were amazingly uniform and as seamless as a school of fish, every voice was amazingly talented, there was not one bad catch in the net. Particularly noteworthy was Seth Strong as the dippy guppy, Flounder, and Hannah Runner as the show stopping mermaid, Aquata. Speaking of the Mersisters, the ensemble members were flawless in their execution of acting, singing, and dancing in their true to form and wildly creative costumes. Other ensembles that fall in this description were the Gulls and electric eels, Flotsam and Jetsam (Tyna Hesser and Thomas Iodice) specifically captivated the audience with their chemistry and deliberate moves.

The tech then captivated the audience, with no shortcomings across all aspects. The creativity with the special effects of a tire swing, bubbles, flying rigs, and attractive set with colorful costumes easily made the actors look even better as they danced along to their timeless numbers. It is easy to see how hard the tech worked, especially with the lighting team having 251 light cues of a variety of color!

Then the marketing and publicity especially stood out with their unique techniques, from a Snapchat filter to having an ad on the radio, and even (and most appealing) having a recycling contest to help save our oceans. The amount of work that all the tech and actors put in then the spreading-the-word tactics helped them sell over 3,500 tickets!

It was smooth seas for Fairfax's cast of The Little Mermaid with leagues of fun for sailors and land-lubbers alike!