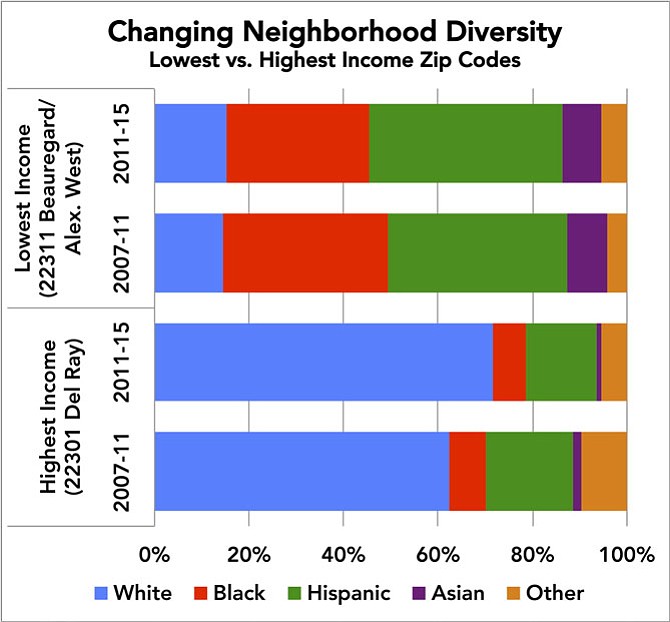 A research firm reports that "The racial composition of Alexandria City’s [zip codes] among those ages 0 to 17 drastically differ and have grown even more segregated … Such segregation is likely to increase the difficulty of maintaining racial balance and equity among ACPS’s schools. … [Alexandria City Public Schools] is likely to witness increases in students of color yet may encounter racial segregation across schools as a reflection of neighborhood segregation."

At its meeting last Thursday, May 10, the School Board considered research findings about school grade-level configuration, transitions, size and diversity, in connection with planning for ballooning student enrollment.

Leila Nuland of Hanover Research Group, contracted in 2016 to study grade configuration, said: “School quality plays a stronger role in academic outcomes than any particular grade configuration. … You do want to limit the number of transitions for students, when you’re talking about their academic performance, their social/emotional learning/development. … When [school] divisions have strong support systems and programming in place, you can combat some of those challenges. This is because no one grade configuration has consistently demonstrated improvements in academic achievement.”

Some evidence suggests that pre-Kindergarten (PK) and sixth grade students benefit more in an integrated elementary school context than from standalone PK and sixth grade as part of middle school. And “it’s not ideal” to separate ninth grade from the overall high school experience, as it currently the case in Alexandria, said Nuland. But overall, “It really comes down to the classroom quality and the social environment being better predictors of your outcomes than a particular grade configuration.”

In FY 2019 ACPS will comprise 22 schools, with PK in a total of seven. These will include one PK center; 12 elementary schools (eight K-5, four PreK-5); one PK-7 school; one PK-8 school; two middle schools (grades 6-8); a grade 9 campus; one high school for grades 10-12; and three alternative education campuses. Many already have more students than they’re designed for, and several also have more than is ideal for learning.

The ideal is no more than “600 students at the elementary level and 1,000 students at the secondary level,” according to Nuland’s presentation. In FY 2018, eight Alexandria elementary schools had 700 or more students, according to the schools’ Capital Improvement Program (CIP) document. The middle schools had 1,400 each. T.C. Williams High School, between its two campuses, had 3,900, with more than 5,300 projected by FY 2028.

The considerations discussed will come to bear imminently in FY 2019 as the school system plans for high school capacity expansion. The project, not yet defined, with $124 million earmarked through FY 2021, represents the schools’ largest single planned investment by far.

On the one hand, multiple campuses with student populations closer to the ideal cap of 1,000 would be more conducive for strictly academic achievement. On the other hand, on top of the challenge of land acquisition, building new high schools might raise questions of equity.

According to a report accompanying Nuland’s presentation: “The racial composition of Alexandria City’s [zip codes] among those ages 0 to 17 drastically differ and have grown even more segregated during the 2011 to 2015 period; such segregation is likely to increase the difficulty of maintaining racial balance and equity among [public] schools. … Disparities in the median household income [have also] grown wider over time, which may impact inequalities in student access to resources across neighborhoods and schools.”

While it’s generally preferable to integrate PK into elementary schools and to minimize transitions between schools, Alexandria’s elementary schools have little room to spare. As it is, all exceed 90 percent capacity and nine exceed 100 percent.

“Elementary student enrollment is projected to grow over the next 10 years by about 800 students, further constraining the use of existing classroom space for early childhood education without expansions or a new school,” according to the working group’s draft recommendations.

“[Alexandria] does not have a PreK plan. I think this board should consider being drivers of that, because all I hear is a huge vacuuming sound: nobody’s filling that gap right now,” said School Board member Karen Graf. She thinks expanded partnerships with private and nonprofit PreK providers could help to meet the need in the elementary schools’ neighborhoods, though perhaps not in the elementary schools themselves.

The School Board will revisit the LREFP recommendations at its next meeting on Thursday, May 24.