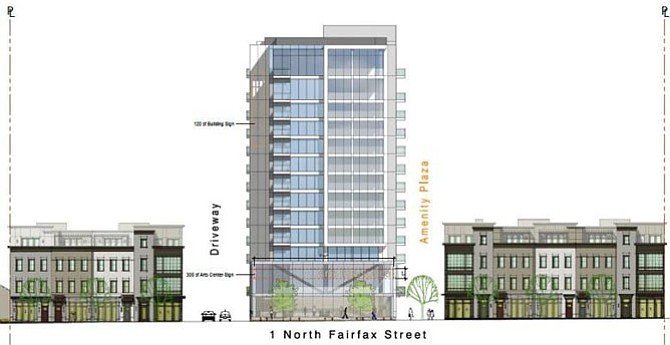 Location of the Crown Plaza redevelopment.

Let it never be said the docket order at a City Council meeting doesn’t matter. Docket item number 11 at the City Council’s April 14 meeting was the council’s approval of an Old Town North Arts and Cultural District.

The new district would allow developers to apply for increased density, as with affordable housing contributions, in exchange for offering a publicly accessible arts or cultural anchor in the building. Less than seconds after the district’s approval, docket item number 12 was a building seeking to make use of the new district.

The Crown Plaza redevelopment at 901 N. Fairfax Street seeks to take an existing 13-story hotel between Montgomery Park and the Mount Vernon Trail and transform it into a residential building. The central concrete tower of the hotel will remain, but will be reskinned with glass and metal. The site will also have 41 three-story townhouses with brick or stone exteriors.

In exchange for 30-percent density bonus, the site will host a 7,300 square foot live theater facing N. Fairfax Street. The site will remain a theater or other arts space for a minimum 30 years.

The site will also create new widened sidewalks on the nearby streets and make $772,677 in improvements to the Mount Vernon Trail. In addition to the arts installment, the project will also yield a $448,153 affordable housing contribution.

“This is a really exciting project,” said Vice Mayor Justin Wilson. “Last night when I got home, went out for a run at about 9:30 p.m. I ran past this project. When I was in Old Town, it was mobbed. In Parker-Grey, mobbed. In Del Rey, mobbed. It was very sleepy past this building. This is going to bring a real vitality to this neighborhood, and I think the arts use is central to that.”