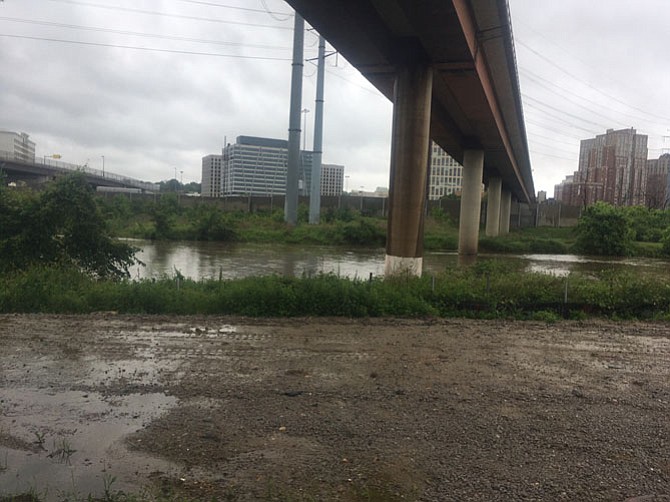 On Friday, May 18, the waters in Cameron Run were reaching the top of the banks. Photo by Mike Salmon. 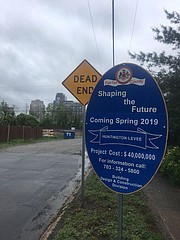 Between Huntington Avenue and Cameron Run, a levee project will help the residents and businesses when completed. 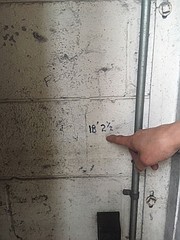 In Huntington Car Care, this is one of two high water marks from past floods.

Elements of the levee include:

On the cinderblock wall of Huntington Car Care, there are two high water marks from floods in the past few years where the waters of Cameron Run overflowed their banks due to rain storms and wreaked havoc on businesses and homeowners along Huntington Avenue.

Chuck Kneece, a mechanic at the garage, pointed to the fire hydrant across the street where the floods reached in 2006, moving his heavy tool box and causing uprooted trees to smash the garage doors. “Water was up to that fire hydrant, we had a car that floated onto another car,” he said. The markings on the wall were testimony to how high the water came.

Although there were several floods in past years, he hasn’t seen the water rising over the banks lately and, although he doesn’t know for sure, it could be attributed to the $40 million Huntington Levee project that’s underway along Cameron Run. It’s a Fairfax County project that is scheduled to be completed in spring 2019, according to the sign off Huntington Avenue. “We haven’t worried about it for a couple of years,” he said on Friday, May 18, while the rain came down outside.

The Huntington area as well as the whole Northern Virginia area were under a flood watch beginning Tuesday, May 15 as storms dropped over six inches of rain, causing flooding on several occasions and thousands of dollars in damage. Huntington is an area prone to flooding because of its proximity to Cameron Run which empties into the Potomac River just east of Huntington. Area residents were aware of the threat from flooding when Fairfax Alerts put out this message: “Based on the forecast from the National Weather Service, there is a chance for some street flooding in the Huntington community.”

This storm may not be to the degree to cause flooding like the homeowners in the area have experienced before though. The engineers do not think the “partially constructed” levee took an active roll to thwart any flooding because it is partially complete and does not have working pumps yet, they said through District Supervisor Dan Storck’s (D-Mount Vernon) office. The contractor, Archer Western, was instructed to “not make the condition any worse than the condition prior to construction,” according to project officials. As of early December, 2017, the project passed the halfway point according to information on the website.

“While the levee can help mitigate flooding of houses from the types of storms that have happened in the past, it is not designed to offer protection from flooding that is caused by storms that are greater than a 100-year event (a storm that has a one percent chance of occurring in any given year),” the levee website read.

Plans for the levee began with former Mount Vernon District Supervisor Gerry Hyland after the 2006 storm, and continued until groundbreaking under Storck. The levee instills a level of confidence in the homeowners in Huntington and now they can work on improving the homes in that area because the chance of a flood is lessened. “This is all the difference in the world,” said Storck, “now they’re going to be there for the long term.”

In June 2006, spring rains caused a flood that damaged 160 homes in the Huntington area. Residents were mopping up water and shoveling mud out of their homes after that flood. In 2009, the U.S. Army Corps of Engineers completed a study to evaluate flood damage reduction measures in the Huntington Community and in November 2012 a stormwater bond referendum was passed by voters. The design includes a earthen wall/I-wall combination, a ponding area and a pumping station, according to project information.

In a break in the rains last Friday, Rafia Hinkson walked her dogs along one of the streets that was underwater in the flood of 2006. She wasn’t sure to credit the levee, because “now it's just one giant construction site,” she said, noting that her basement wasn’t flooded either. “This is the first real rain we’ve had in a long time,” she said. This was in line with the fact that mere rainstorms may not be the type that have impacted Huntington in the past, classified as “tidal or hurricane related storms,” according to Storck’s storm classification information. Nevertheless, the levee is expected to be more of a factor when such a storm hits the area.