‘This is the Sound of One Voice’
Votes

‘This is the Sound of One Voice’ 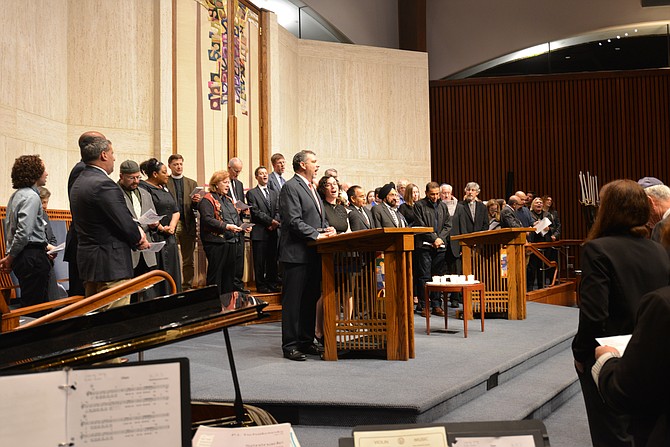 Unity in Faith. During the service for the victims of the Temple of Life and the Kroger store shootings, the hosts at the Temple Rodef Shalom in Falls Church invited the representatives of the many faiths who had gathered in unity to come forward and “stand as one.” Photo by Andrea Worker.

Urged to go forth and be “one voice, one community,” the thousands who attended the service to honor the lives lost at Tree of Life synagogue in Pittsburgh, and at the Kroger grocery store in Louisville, did just that – spilling out around the Temple and on the streets, stopping to talk, to chat with neighbors and strengthen new connections. 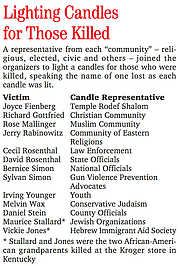 Thousands gathered at Temple Rodef Shalom in Falls Church on Tuesday evening, Oct. 30, answering an invitation to “all neighbors, friends, interfaith and community partners to our service of solidarity, community and comfort.”

All ages, all walks of life, all faiths, all ethnic backgrounds, they filled the Temple’s main sanctuary, adjacent meeting rooms, social hall and livestreaming venues to honor the lives of those lost at the mass shooting at Tree of Life synagogue in Pittsburgh, Pa. on Oct.27, and at a Kroger grocery store in Louisville, Ky., just days before, and to seek comfort and healing by coming together.

Senior Rabbi Amy Schwartzman, Cantor Michael Shochet, Cantor Rachel Rhodes and others expressed their “heartfelt gratitude and welcome” to the thousands who “came together despite any differences” to demonstrate their common humanity.

Yasmina, from Herndon, is a member of the All Dulles Area Muslim Society (Adams). “It is beautiful, everyone together, even if just to share our sadness,” she said. “May it continue to be so.”

Before beginning the service, Shochet called on the attendees to “turn to each other and introduce yourselves.”

Schwartzman, who led much of the service, repeated that call, with the reminder that the many faiths represented there shared the mandate to “welcome the strangers among us, to stand together.

Members of the Temple shared their religious home with elected officials from every level. U.S. Sen. Mark Warner was among the federal representatives. The Commonwealth’s contingent included a full complement of the region’s state delegates and senators, and a number of Fairfax County’s supervisors, including Chairman Sharon Bulova. Fairfax County Police Chief Ed Roessler was in attendance, as were officers from the McLean District station, including commander Capt. Alan Hanson.

As welcome as the presence of “those who serve us in so many capacities” was on the occasion, there were no political speeches on the night or calls to action other than to “be the blessing,” as Schwartzmann urged all to continue to nurture their common bonds.

In all, it was a simple ceremony. With only a piano and a violin as accompaniment, the cantors, the choir, and often-times the congregants sang songs for healing and unity and listened and participated in prayers for the same, and for those in law enforcement.

After the candles were lit, the “Mourner’s Kaddish,” the traditional prayer to honor the deceased, was recited. The prayer focuses on life, and acts as a reminder that those who mourn do not mourn alone, and many of those mourners were brought to tears before the last words of the Kaddish had finished echoing in the temple. More emotion followed as Cantors Shochet and Rhodes, with singer/guitarist Robbie Schaefer sang the song “One Voice,” with its melody and lyrics that captured the spirit of the gathering.

With a final Benediction, the attendees were sent forward with thanks, blessings, and the hope that they would continue to be “one voice” no matter who they are or what they believe.