‘This Is Exactly What We Want There’ in Fairfax City
Votes

‘This Is Exactly What We Want There’ in Fairfax City 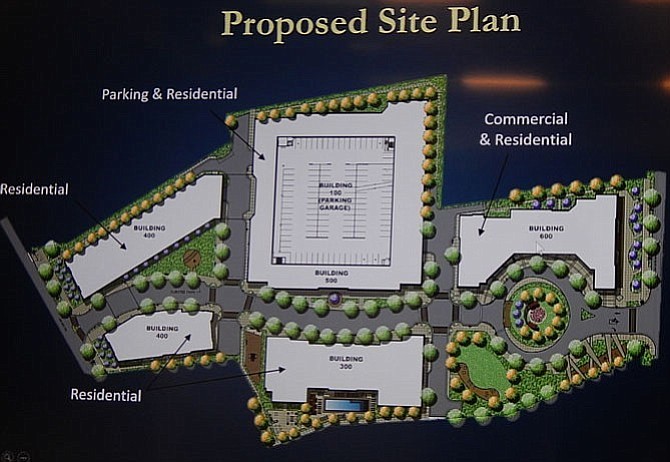 The revised site plan for the Fairfax Gateway mixed-use development.

Since then, its new developer, FF Realty IV LLC, made several revisions; and following a Sept. 11 public hearing, Council approved them. Now, if all goes well, the renamed Fairfax Gateway project should begin construction next spring.

Initially planned for the 8.33-acre site were 403 multifamily apartments, 24 of which would be affordable dwelling units. Also slated were 29,000 square feet of first-floor commercial uses – 25,000 square feet would be for retail and a restaurant, and a 4,000-square-foot office space would be dedicated to the nonprofit CASA (Court-Appointed Special Advocates).

But in February, the applicant asked to amend the project. The new proposal maintains all the apartment and affordable-housing units. But it features a more varied mix of apartments, including 43 studios, 179 one-bedroom, 169 two-bedroom and 12 three-bedroom. One story was shaved off the parking garage, and 50 additional, on-street, parking spaces are scattered throughout the site.

The commercial space has been reduced to just 21,249 square feet, including the 4,000 square feet for CASA. The remaining 17,249 square feet of commercial use is proposed as a restaurant, plus ground-floor retail and office space. The reduction is estimated to result in 746 less vehicle trips/day than initially anticipated.

THE PLAN also contains a through street with a connection at the Bevan Drive signal at Fairfax Boulevard, plus a new, un-signalized entrance on Lee Highway. The community’s road network will then correspond to the future redevelopment of the rest of the Kamp Washington triangle, while treating the section connecting Lee Highway to Fairfax Boulevard with several, traffic-calming elements to reduce cut-through traffic.

Also planned are trails connecting to adjacent properties, plus open space including a 5,600-square-foot contemplative space next to the Jermantown Cemetery. Fairfax Gateway will maintain this space and the cemetery for 30 years.

At the September public hearing, Jason Sutphin, the City’s Community Development chief, said the project is estimated to yield 53 students, but the developer has proffered $200,000 to the City schools in mitigation. He also noted that the Board of Architectural Review wanted more balconies and other decorative elements added to the building facades.

Fairfax Gateway might also have a negative financial impact on Fairfax, Sutphin explained, because of residents needing City services, especially schools. And, added Brooke Hardin, director of Community Development & Planning, “The City would have to make infrastructure improvements there for this use.”

But, said Mayor David Meyer, “There are also advantages to this project that we haven’t quantified financially – for example, the provision of affordable housing, the cemetery maintenance and the undergrounding of utilities. And, hopefully, this project will be a catalyst to development in the west end of the City.”

“We’re excited to bring this project to fruition in the City of Fairfax,” said land-use attorney Robert Brant, representing FF Realty (Fairfield). “These modifications won’t alter its character or quality. All the previous proffers have been carried forward, and City staff input has improved this application.”

Furthermore, he said, “This project will unmistakably have a positive impact on Kamp Washington and on the City as a whole. It’ll transform this area and provide the much-needed residential density to support the commercial uses there.” Besides the schools’ proffer, said Brant, the developer is contributing more than $100,000 to Fairfax parks, plus $25,000 toward a traffic study in that area.

“We’ll do streetscape improvements along Fairfax Boulevard and will also provide much-needed, multifamily housing options in the City for young professionals and empty-nesters wanting to downsize,” he said. “Fairfield is committed to realizing this development as soon as possible. We’ve already done a lot of the design work, ahead of time, so we’re ready to hit the ground running. If approved this evening, we anticipate filing a site plan within a week.”

Bryan Condie, vice president of Fairfield in Arlington, said they hope to start construction in March 2019, with an eye toward occupancy around December 2020.

COUNCILMAN Sang Yi asked why the retail uses were reduced, and Brant said, “There’s already a significant amount of retail/commercial here, and we don’t want to saturate the area with it. Brick-and-mortar retail is struggling.”

“But a lot of places in Kamp Washington are doing pretty well,” countered Yi. “More retail could provide more jobs and revenue.” But Condie said there’s currently no residential component there, and this development would provide it. He also said it would be difficult for people to access the retail uses there, anyway, because they’ll be internal on the site.

During public comments, resident Rick Dixon told the Council, “It’s not a retail site. You’ve got a class builder telling us what should go there – you should listen.”

Then Councilman Michael DeMarco made a motion to approve the project amendments, with Councilman Jon Stehle seconding. “This is exactly what we want to happen there,” said DeMarco.

Councilwoman Jennifer Passey agreed that residential is needed there, but Yi still decried the amount of proposed retail. However, said Councilwoman Janice Miller, “We already approved this project; this is just a modification of it.”

Added Councilwoman So Lim, “I feel like this project is appropriate for Kamp Washington.” The Council then voted 5-1 in favor of it, with just Yi voting no.