‘Lot of Negative Pressure’ in Alexandria 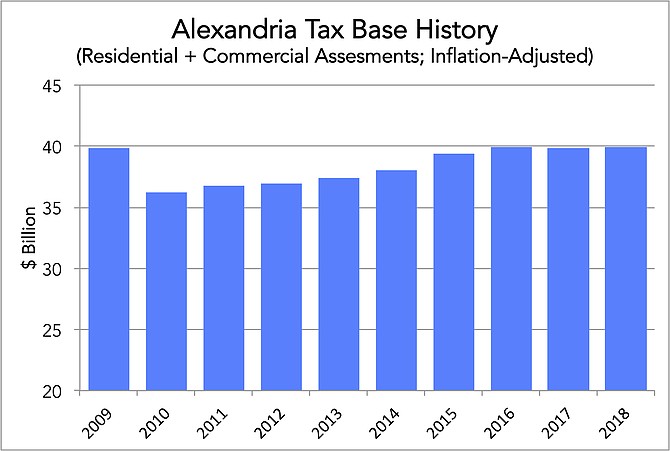 The city faces a preliminary FY 2020 budget gap of $28 million, including an $18 million gap for the school division’s budget, which the city largely funds. The city administration forecasts the total gap will widen to $91 million in five years.

This continues a persistent trend of expenditures outpacing revenues. Each year for the past several years, the City Council and School Board have wrestled to balance their budgets, as required by law — to “solve for the gap,” as Morgan Routt, the city’s budget director, put it. They’ve done so by varying combinations of cuts; raising new revenue and reducing or outsourcing staffing (in the city’s case); and drawing down on fund balance (in the schools’ case).

For both the city government and school division, the principal budget driver is personnel costs.

Salaries and benefits account for more than half of the city’s operating budget, excluding schools and capital funding, said Routt. For the schools, the proportion is almost 90 percent, said Dr. Gregory Hutchings Jr., the schools’ superintendent.

Rising health insurance costs represent a particular challenge, especially for the schools, which have seen a 39 percent increase over five years.

While the city has cut or contracted out 71 full-time equivalent positions since 2009, the schools have added positions in recent years, largely due to ballooning student enrollment.

Students learning English as a second language and students eligible for free and reduced price meals (a federal program and proxy measure of poverty) have increased by 21 percent and 8 percent over five years. These subgroups, which require more specialized instruction and services and thus cost more, accounted for 32 percent and 59 percent of Alexandria’s student body in FY 2018 — about twice the proportions in Arlington and Fairfax’s schools.

Construction and labor costs continue to rise, making the city and schools’ long lists of capital projects that much more expensive.

Once project cost re-estimates are finalized for this budget go-around, “we may end up … saying, we can’t afford all these, and that’ll send us back to the drawing board. Or we may say, these are important, critical projects we need to move forward with, and therefore we’ll have to up the local funding, either through debt or through cash capital, for those projects,” said City Manager Mark Jinks.

For the schools’ part, “we would like to move away from allocating the maximum use of our fund balance every year to balance our budget,” said Dominic Turner, the schools’ acting CFO. Following such a trajectory, “we would end up with no fund balance, and if there were an emergency, we wouldn’t have the funds to be able to cover that.”

“We’re in one of the longest growth cycles in U.S. history. … It’s been almost 10 years since we’ve had what anyone technically calls a recession,” said Kendel Taylor, the city’s finance director.

Yet a decade of national growth hasn’t resulted in Alexandria’s revenues keeping up with spending pressures.

Residential and commercial real property, which together account for about 60 percent of FY 2019 city General Fund revenues, haven’t seen robust growth. The residential tax base “has come back” since the aftermath of the financial crisis, “but it really isn’t a thriving tax category,” said Taylor. Commercial assessments have remained relatively “flat.”

That’s in unadjusted dollars. In inflation-adjusted dollars, comparing 2018 to 2009, residential and commercial assessments haven’t grown at all, remaining almost exactly flat at $22 billion and $17 billion.

“[Alexandria’s] aid from other governments [state, federal] is basically stagnant,” said Taylor. “The changes from the Medicaid expansion will probably result in a loss for us. Other revenue sources are going to go down and it’s going to net to nothing. We’re going to watch very closely what happens with the Internet sales tax reform. But … it’s not going to be the panacea” that some have hoped for. Amazon’s second headquarters, announced for Arlington and Alexandria this week, “will hopefully have long-term impact. But we won’t see immediate revenue impact …. We can’t count on that being the thing that saves us in the coming fiscal year,” she said.

On the other hand, population influx resulting from Amazon’s decision could exacerbate the schools’ existing enrollment-related budget challenges, said Hutchings.

In the regional economy overall, “there’s been a shift: we aren’t as reliant on the federal government” as in the past, said Taylor. “We’re more diversified, and that’s good. But … jobs that we have today are not as high-paying … as the jobs we had back in 2008-2010. … The jobs we lost were worth more than the new jobs we’ve added, to the tune of about $44,000 per job,” compared to 2007, in terms of gross regional product.

As a result, the Washington, D.C. region’s ranking among metropolitans nationwide, in terms of per capita income growth, slipped from 4th during the period 2000-06 to 15th during 2010-16.

“And this, remember, is in the midst of the country’s second longest economic growth cycle in history,” said Taylor.

History suggests “it’s very likely we’re going to have some sort of slowdown. Everyone agrees on that,” she said.

The probability of a U.S. recession will rise to 14 percent by next October, according to the Federal Reserve Bank of New York, using a model based on Treasury yields. That’s up from about 10 percent presently, 8 percent a year ago, 3 percent two years ago. The last time the model yielded a 14-percent likelihood was July 2006, a year and a half before the Great Recession began.

“In the past, the D.C. area has been able to withstand some of the recessions’ impacts that other parts of the country aren’t able to withstand, because of our reliance on the federal government,” said Taylor. Less economic dependence on the feds at present, while “really good” in other respects, “could also mean that we don’t weather as well when the next recession happens.”

Summing up, she said: “The reality is that, economically speaking, nobody does know what’s going to happen in the next 6-12 months. But the indicators that we have show a lot of negative pressure for our citizens and for our city revenues.”