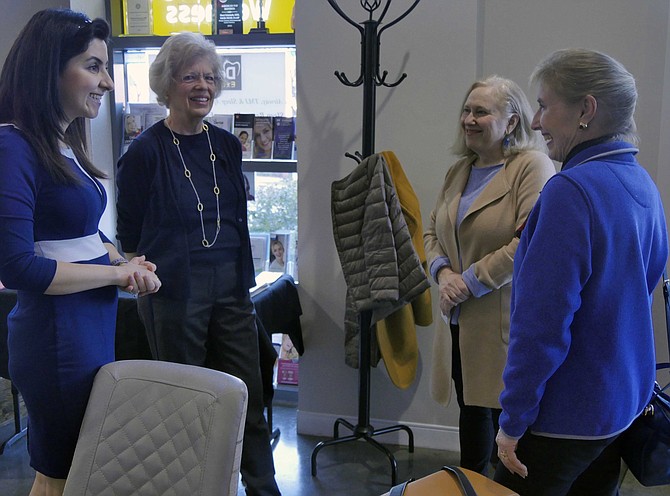 Dr. Sheri Salartash (left) and Janice Curtin, president of the Alexandria chapter of (WAPF) chat with members before the lecture on Nov. 11. Photo by Shirley Ruhe.

Dr. Sheri Salartash wanted to be a dentist since she was 9 years old, when a dental student needed a practice patient and she volunteered. "And I always liked apparatuses and they were making models in the lab." Now Salartash is a holistic dentist practicing integrative medicine in Del Ray. "The mouth is the gateway to total health, more important than you might realize."

She sees patients from newborn to "120 or so, you know." Parents come in with a fussy baby with reflux or stomach issues or colic. "We do an assessment. Since the first thing a baby does is breastfeed, if anything restricts the lip, the baby can't latch on properly. He gets a lot of gas and colic and sucks in air. The mother gets discouraged so goes to bottle feeding that doesn't give the baby the same good nutrients."

Salartash says often a tie of the lip (a piece of skin inside the upper mouth) or a tongue-tie on the bottom can restrict the baby's mouth movement. "It used to be the midwife would keep one nail long to clip it automatically when the baby was born. Today in the office it is a simple procedure. "We use a little numbing jelly and then a soft tissue laser to snip the tie." Salartash says a lot of pediatricians don't know about the relationship of a tie to breastfeeding and just automatically give a fussy baby Zantac. She goes to pediatricians’ offices to discuss this connection.

She says, "As dentists we fix teeth, but who will fix the medical issues?"

She often sees people who come in with sleep apnea issues. She says they do a scan and take full body pictures of the patient. The sleep apnea is often caused by restrictive airways so she creates an osteopathic appliance to expand the adult arches very slowly and gently. She had one patient who was experiencing 23 events an hour. "He went down to six after having the area expanded."

She explains if the teeth are misaligned a person may have a restricted airway. The person automatically thrusts the bottom jaw forward in order to take in more air. This puts extra weight on the neck and affects the posture and related muscles. Everything is related. In dental school she explains they learn about drilling and how to keep up with science so they don’t get behind. "They don't talk about airways.”

Salartash says she is often the general contractor working with other professionals to fix the underlying issues, so a condition doesn't happen again. For instance, you can give a patient who is grinding her teeth an appliance, but it doesn't take care of the reason why it is happening.

She quotes Westin A. Price, who founded WAPF (Weston A. Price Foundation), the sponsor of today's lecture. If you have wide dental arches and non-crowding, there is plenty of room for the glands, good skeletal development, muscles, keen eyesight and hearing. Salartash adds, "How our health care system functions today, we don't really talk to each other. But you can't treat one part of the body and leave the other parts alone."

Salartash attended dental school in 2009, but was led in the direction of holistic dental medicine in 2010 when she started to have health issues. They had given her mercury fillings in dental school. "Mercury causes stress." She had symptoms of thyroid problems. "And they told me to put a fluoride tray in my mouth every day. But that is toxic. All this made my condition worse. It was the fifth endocrinologist who tested my antibodies and found I had an autoimmune disease."

"I am better now. I used to be exhausted at noon and have to take a nap. I did a liver detox protocol. I'm on a good supplement program with D3, K2 and B methyl, since some people have a gene that doesn't allow them to absorb vitamins. I have both mutations."

She had the mercury fillings removed from her teeth under safe conditions and started looking into diet. In Tehran where she grew up, she says she had a really good diet and ate at home. When she came to America, she started having stomach issues because she was eating gluten, which makes autoimmune diseases even worse. "You add all the toxins, the bowel will overload."

Salartash’s lecture was given at the WAPF fall meeting on Sunday, Nov. 11 at the Integrative Dental Center where she works. Janice Curtin, president of the Alexandria chapter says, “The best source I have found for information on how to eat for good health, straight teeth, and good bone structure comes from the Weston A. Price Foundation.

“This is the information I wish I had known when my children were growing up. I believe they could have had a wider bone structure to allow straight teeth and we could have avoided the stress and expense of braces several times.

“The diet they needed was the one my parents had growing up on a farm, with nearly all food from the farm, including milk. My parents had beautiful straight teeth, no cavities, and they had room for their wisdom teeth. I just wish I could tell the parents raising children now because it is difficult to undo the structural damage of a processed food diet.”

People at Work is a regular column focusing on people in the community doing their work. Suggestions may be sent to slrbc@aol.com