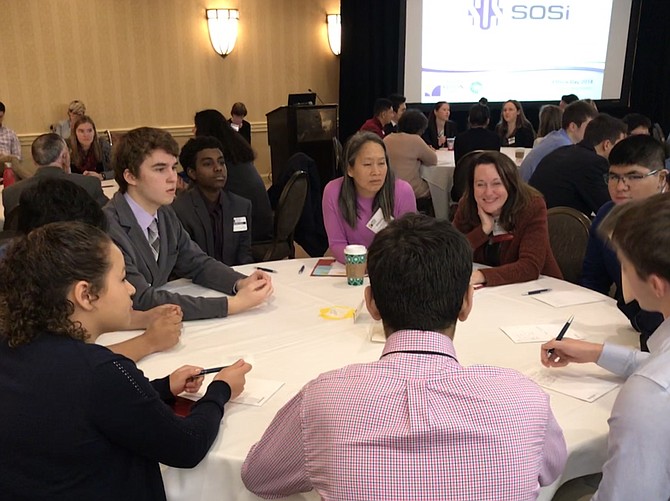 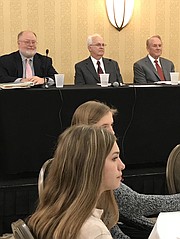 “It’s a great day when our business community comes together to support students with real-world challenges and the opportunity to apply collaboration and communication skills," said Kim Retzer, South Lakes High School principal, as she stood in the hallway of the Sheraton Reston hotel on Monday, Nov. 19, 2018. For the 26th year in a row, the senior class of South Lakes High School in Reston participated in the Ethics Day program, presented in a 26-year partnership between the Greater Reston Chamber of Commerce and South Lakes High School.

Mark S. Ingrao, CCP CAE, President & CEO Greater Reston Chamber of Commerce, explained a bit about the program: "The Greater Reston Chamber of Commerce is the first Chamber in the Northern Virginia area to develop a program that engages our future leaders in ethical decision making and provide our members an opportunity to facilitate discussions with these young men and women. ...This ethical discourse challenges our youth and encourages our volunteers."

Dressed in business attire, students and volunteer table leaders from the local business community visited four module rooms. There facilitators, and if needed actors, presented an event, scenario or video to the students meant to depict what they as young adults might face in the future. Given it may not precisely be the same, it would give students the opportunity to examine their own biases and how they might play a role in decision-making.

ONE MODULE was the Organ Donation Room, which offered students the scenario where five actors, portraying end-stage heart failure patients, presented their cases to receive the one available heart that came available at Reston Hospital. Facilitators, Nancy Susco and Tony Barnett of Reston Hospital Center cautioned students not to be swayed by emotion or promises.

After hearing the patients’ pleas, the students at each table discussed their thoughts and values, practiced active listening and attempted to reach a consensus naming one recipient. Students had to agree unanimously on who should get the heart, yet as individuals and a committee be able to defend the choice. While table leaders including Eileen McNally, Leidos, and Joe Becker, Not Your Average Joe’s, facilitated student conversation through active listening, questions, and drawing students out, they were not to be opinion-givers, stated information in a Leader handout.

In the Courtroom Dilemma, Facilitator Laura Kowalski, Reston Association, informed the students they had been ‘selected to serve on a jury’ in Fairfax County Circuit Court. She said what they were about to see and hear was based on a real courtroom record of Involuntary Manslaughter. Kowalski commenced telling the “jury” the student who died reportedly had been drinking heavily at a party and was killed as a passenger in her own car when her friend, who allegedly had not been drinking and did not have a license, attempted to drive her home. After hearing from actor witnesses and attorneys, such as Ken Chadwick, Esq., Matt Clary III and Judge Glenn Clayton, each jury table had to reach a unanimous verdict of guilty or not guilty.

DURING THE LUNCH BREAK, students lingered in the hallway. Earlier, the Chamber had instructed the Connection not to identify students by name but permitted comments and photos.

In an interview, one student reflected on Ethics Day. "I think today really opened my eyes to a lot of decisions I would never have thought of if I hadn’t experienced them first-hand today,” he said.

"These seniors represent our future; we should all be willing to do whatever we can to prepare them to make good decisions. I often tell folks appearing before me that, ‘Life is full of choices,’ and it is programs like this that will help them to ‘choose wisely’ in the future. Some timely advice, especially in light of current events," wrote Glenn L. Clayton II, Judge, Juvenile & Domestic Relations District Court, Fairfax County Courthouse.

"There are so many challenging decisions we all face every day, and this event has given every student who has been a senior at SLHS exposure to these types of difficult scenarios which they may face. It gives them the tools and experience to draw upon to make better ethical decisions," said Ethics Day Actor Juliana Carter, Tailored Living COO, who responded to a request on her perspective of the day.