Changes to the outdated underpass at Cinder Bed Road being studied. 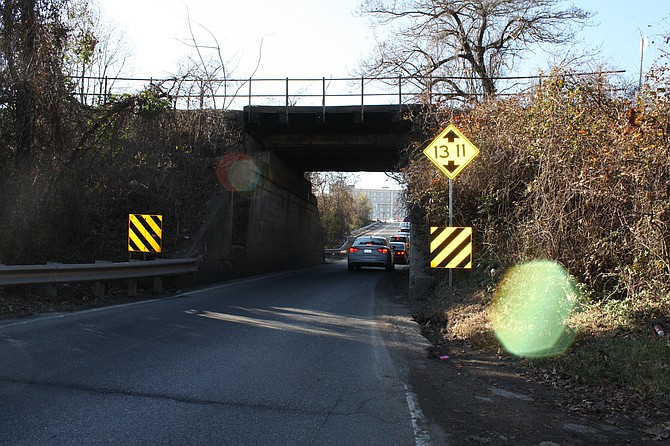 Changes looked at for this one-lane underpass in Newington. Photo by Mike Salmon.

Springfield — Over the last couple of months, Cinder Bed Road has become the detour route for the new bridge that is about half way done over the CSX 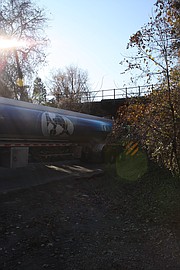 One-lane under these railroad tracks is barely enough for this tanker truck.

Railroad tracks in Newington. The detour route was mapped out by the Virginia Department of Transportation (VDOT) in connection with their Backlick Road Bridge over the CSX Railroad project. During the week, particularly around the rush hours, the traffic backs up on Cinder Bed Road past the Newington Road intersection, causing another delay in a frequently used thoroughfare.

There is a rumor that the underpass will be fixed as part of the bridge project that’s going on now but that’s only partially true. According to Michael Murphy, a VDOT public affairs spokesperson, there is a study going on concerning a new overpass at that location, and that study is funded by the Department of Rail and Public Transportation (DRPT) as part of Atlantic Gateway. Whether or not Newington Road is closed during construction of the underpass has not been decided yet; the decision won’t be made until the project enters the design phase. The design phase could start as early as 2019, according to Murphy.

The underpass is part of a frequently used cut-through route from the Telegraph Road-Fort Belvoir area to I-95.

Jack Moriarty is a bartender at Fair Winds, a local brewery right next to the bridge. He’s has seen all the traffic backing up and pedestrians dangerously walking under the bridge. “I’m surprised it’s still open,” he said. And as far as the increased rush hour back-ups, “that’s good for our business.”

Candice Bennett, a Lorton Station community association board member, hasn’t heard anything. She recently attended a South County Federation meeting, but it wasn’t mentioned. “Nothing about any changes coming to this road,” she said.

The $9.5 million bridge project about a mile down the road from the one-lane bridge is part of the larger Atlantic Gateway improvements, a multi-modal suite of projects focused on the I-95 corridor between Washington, D.C. and Fredericksburg, according to the project website. The new bridge is expected to be opened by spring 2019.

The Newington Road-Cinder Bed Road area can be described as a cross between industrial and warehouse-office park. On the southern end, it ends in a circle, surrounded by warehouses and offices, and on the northern end, there are a few vacant properties, various auto body companies, a Fairfax Water Authority office and the Fairfax County Newington Transportation Facility.

A few years ago, Cinder Bed Road was realigned and a bridge built over the Long Branch stream, eliminating an area that frequently flooded. It is in the Mount Vernon District.

At the dead end on the north end, a bike trail winds around under the power lines, continues along the stream, and goes uphill to the Island Creek community. Plans are in the works to connect the bike trail to the Franconia-Springfield Metro Station.