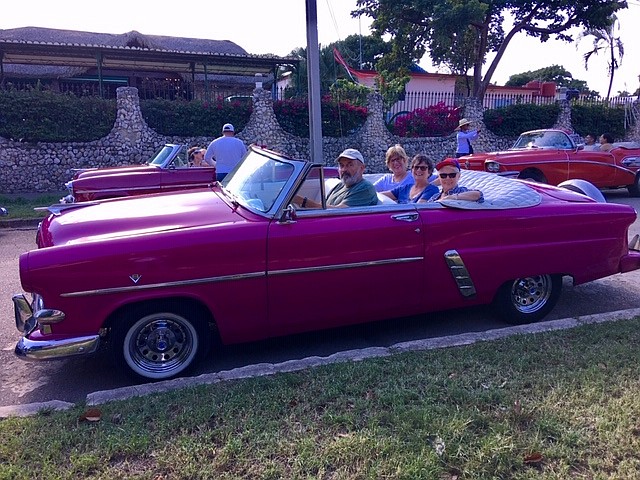 In Havana in 1954 Ford for touring the city. From right: Fran Lovaas, Pat Coluzzi, Dale Sheldon and John Lovaas at the wheel. Latter replaced by licensed Cuban driver for city tour. Photo by Leandro Cortes

The island of Cuba is only 90 miles from the Florida coast. On Nov. 8, we travelled there on a cruise ship, one of the few ways to visit Cuba since President 45 sharply restricted travel there by Americans. A nascent tourist industry and the small businesses and jobs it generated have been crushed along with contacts between our two peoples. We stopped in two southern Cuban ports—Cienfuegos and Santiago de Cuba — and travelled by bus for a one-day visit to Havana. From the port of Cienfuegos where we entered through a hoop house-sized building with heat sensing equipment measuring body temperatures (to detect fevers!) to Havana’s streets with brightly colored 1950s vintage American cars, Cuba was different.

Cienfuegos had the wonderful charm of imperial Spanish architecture and design with broad avenues, plazas and monuments of heroes. We could see and feel the rhythm of the music and the beauty of colorful works of art everywhere. The people were diverse and warm. While the stores were not stocked with flashy consumer goods you’d find in the U.S. and people were obviously not wealthy, nor did we see the stark poverty and malnutrition one finds elsewhere Latin America.

I found it interesting to chat with people I met — well spoken and literate as well as warm and engaging. With universal, free health care, more doctors per capita than most countries and free education through university, Cuba is well positioned to grow economically once they figure out how to blend some (not too much) free market incentives into the system. To date, that opening remains small.

Havana was amazing — clean, with beautiful parks, plazas, monuments and lovely buildings, although there were areas with deteriorating structures. I particularly remember one house we passed, riding in a pink 1954 Ford convertible, with an old woman leaning out a second story window smiling at me — a couple of feet below her, a big chunk of the building’s wall was gone.

We passed the American Embassy on a beautiful, wide avenue on Havana Bay, with a 16th century castle/fortress several blocks long visible across the bay. I swear half the cars I saw in Havana were the classic, gaudy-colored 1950s American cars including the ones our tour group rode in, still going 60 years later! The latest models were 1959 or 1960, the year the U.S. declared the embargo. Otherwise, there are few personal automobiles in Cuba. Cars are subject to huge duties and can be purchased only with bags full of cash — literally! We rarely passed cars on the dual lane highway between Havana and Cienfuegos.

Fidel is dead and his visage is mostly gone, too. He is buried in a modest tomb and ordered there be no signs, no monuments to him. But, Che Guevara, Fidel’s comrade in arms and the consummate rebel, is everywhere--on signs, walls, t-shirts, etc. Jose Marti, the great Latin Liberator is the 2nd most visible hero.

Things noticeably not seen: Boats! Along all the shores we passed, I could count the number of small boats we saw — on islands people fish for food, they travel place to place on their boats. Why no boats?!? Think for a moment … remember thousands of Cubans making their way on all manner of crafts escaping to US shores? Cubans must have a rarely granted special permit to own a boat — because they kept going out in them and never coming back. We also saw very few uniformed police, no military that I remember, and no clerics.

Cuba, largely dependent on agriculture, has to import most of its food staples — e.g., rice and beans — while arable land sits idle or produces sugar cane, the number one export crop. Most Cubans get their basic foods from public bodegas by way of government-issued ration cards. Fidelismo seems to have destroyed basic agriculture, although, amazingly, organic agriculture is appearing with domestic and foreign market potential. Agriculture is an area where the United States could transfer a great deal of technology and knowhow should we ever get back to a good working partnership with our Cuban neighbors.

We have one regret — our time in Cuba was too brief. We’d like to go again.